Statistics: Emma is around 6kg now. She measured 61.5cm at her previous check up on 20 Nov.  I guess she is much taller now. She was on 50 percentile for her weight and 75 percentile for her height, hopefully she will be taller than me. hehe. She is still on medium size diapers - we are now using pampers as Huggies tends to leak. Her head circumference has also increased so her face is looking more oval than pointy! 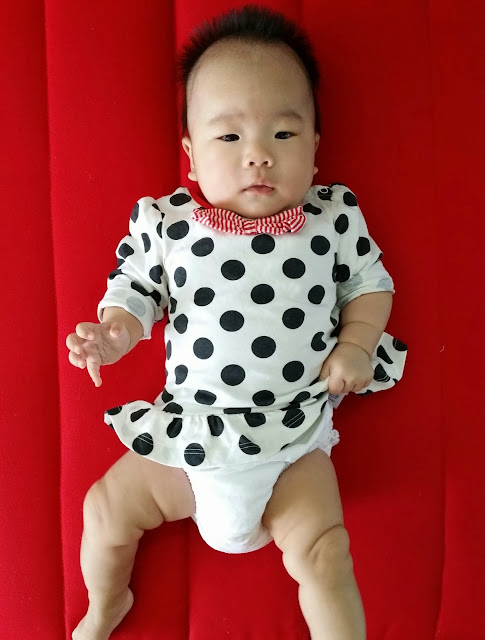 Health: So far so good :) She has started attending infant care last Mon and there were 3 separate cases of Hand Foot Mouth Disease at the playgroup class. They were located at different ends of the centre. so praying hard that Emma would be safe from these viruses. I was rather worried but guess such HFMD has became very common in ifc and childcare and we just got to watch out for symptoms.

She had her 3 month jabs - total 2 vaccinations on each tight and another oral one last month. She cried rather hard after the jabs but slept asleep after a short while. She did well for the physical assessment but the Dr would like to check on her neck strength when we return for the 4th month jab. She recovered after 2 days of slightly high temperature (up to 37 Degree Celsius).

We will be going for her 4th month jab after Christmas. Pray that her body is strong to fight the vaccines. 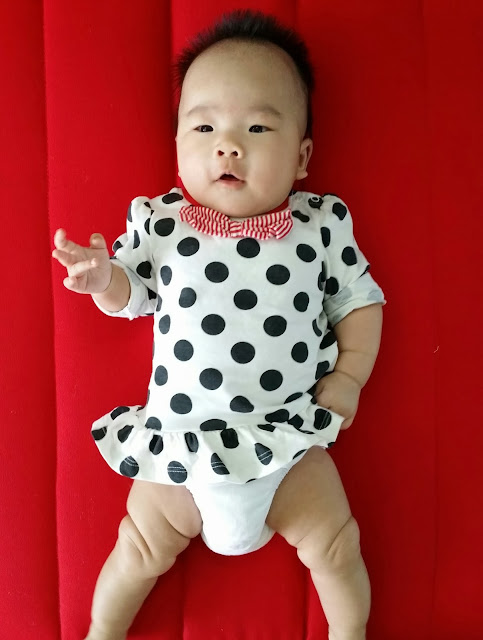 Diet: Still on total breastmilk. She has moved on from feeding 3hrly to 3.5hrly. To prep for work, I have been feeding her at 6am instead of 7am. She takes 6 feeds a day from 6am to 11pm. Of which 4 times she would take her bottles of expressed milk. I nurse her at 6am (before work) and 730pm (after work). She can drink up 120ml to 150ml for her afternoon feeds and 60ml for her dreamfeed at 1030pm. Thankful that she has been taking the bottles well so far. 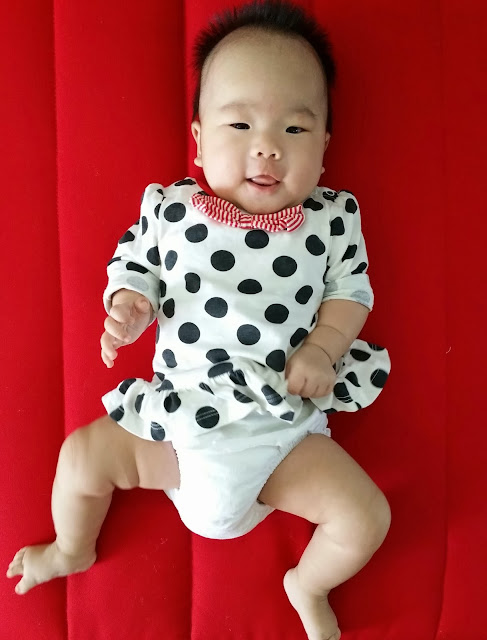 Sleep: She sleeps around 830pm to the next day 6am. In between, I would pick her up at around 1030pm for a dreamfeed while she continues sleep. Thankful for this great sleeper. She used to wake up at 10pm for her milk but since 2 weeks ago, we realised that she didn't wake up. We tried to skip her 10pm feed for a few nights but her last feed at 730pm would only last her till 5am the next time. Hence, we top up a little dreamfeed at 1030pm. We had a bedtime routine for her and she would now settle to sleep herself. Unlike before, she would fuss for a while when we put her to sleep after the bedtime routine.

Her naps at ifc are less regular than before, I guess she is still adjusting to a more noisy environment. She has been taking several naps of 30mins to 2hrs at sch each day. 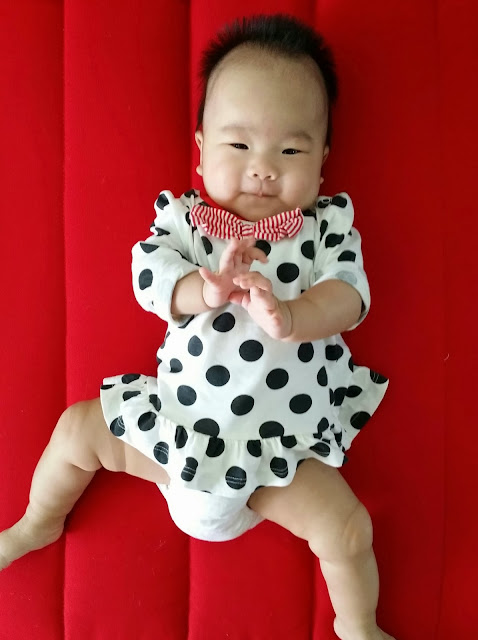 Activity: She has been enjoying her tummy time much better than before. She could now grabs things and hair! She loves to play with her hands and munch on them. She also loves it when we talk or sing to her.

Social/Outings: The months of Nov and Dec are full of celebrations. We celebrated my brother's, mother's, father-in-law's and niece's birthday!

We went also for Jul/August 2013 babies Christmas gathering. Glad to meet around 30 other mummies whom we have been interacting on our fb private group. hehe. Here's some of the cute babies.. 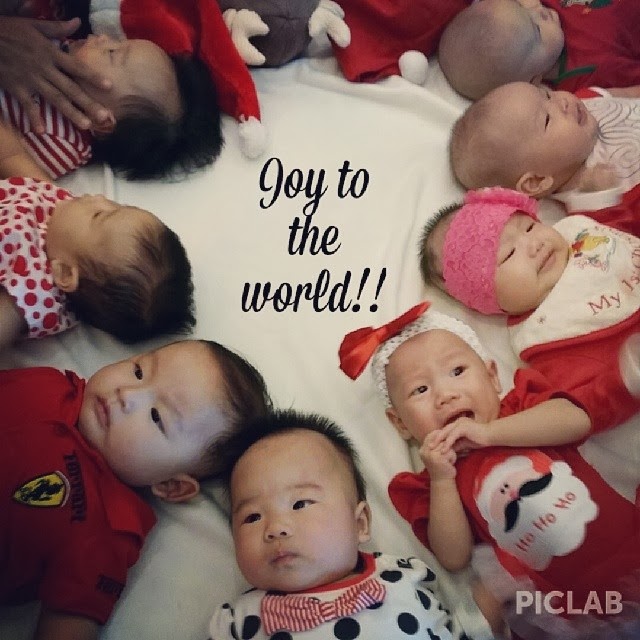 Clothes: Started to wear bigger sized clothes now, some of which are 6 months :) Some clothes are getting really tight fitting on her. Time to buy more clothes!! Just another 1 month plus before Chinese New Year and my mum has already bought some clothes for her.

Milestones: She now has much better eyesight and loves to observe the surrounding. This should goes into next month update, but anyway... she did her first flip from back to tummy down today! I'm so happy that she waited for me to witness it before she starts flipping in ifc. :)

We also noticed that she has more control of her hands, it is more than reflex when she moves her hands. She would use her hands to touch our faces. She is more responsive and could now laugh continuously when we humour her. It really melts my heart when she laugh after us. 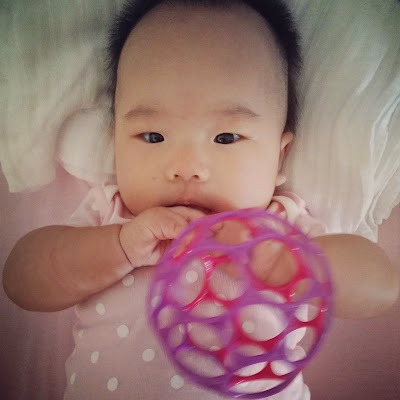 Postpartum: The past month seems to be more challenging than the first 3 months. I started to pump more frequently and came all sort of breastfeeding woes. Plugged ducts, bleeding nipples, nipple blisters and falling supply. Arghh. It was miserable. But thankfully, things have kind of settled down. I pray that my milk supply would maintain after I start work next week. 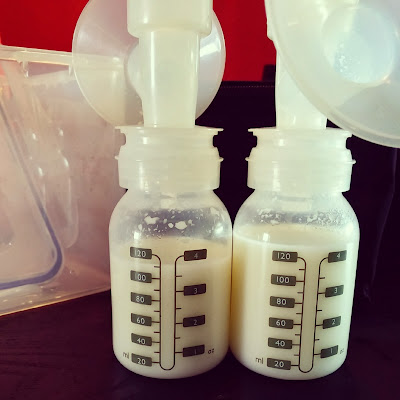 I also had a haircut or two haircuts and now sporting a shorter hair. :) Wouldn't have much time to blow my hair when I started work, so I guess shorter hair would work better for me. As for my weight, it has been hovering around 50kg and I am still stuck with these 3-4kg. 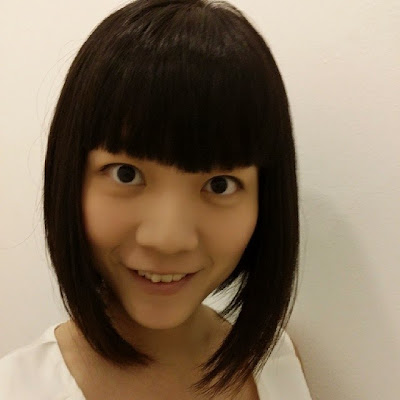 Am thankful that hubby took 2 weeks of leaves before I start work so that we could spend some family time, couple time and prepare for ifc/work. I am feeling rather emotional to be separated from her, it has been almost a year since I was expecting her and have been always be with her. I felt kind of loss, worried and guilty. I am learning to let go and let God do his work. Indeed, it is test of faith. Just another few days and I am going to embark on my full time working mummy journey, I pray for more strength and that I would be able to settle down fast.


Others: Emma started her infant care on 9 Dec. Things have been great so far and she seems to be adapting much better than me. Hubby would be sending and fetching her to and fro school. She would reach school around 8am and leave by 6pm. I didn't get to stay at the school for full day as Hubby stopped me, we just popped by for a while to check out and leave. The teachers there are very caring and experienced. They would note down the timings that she feeds, shower, nappy change and sleep so we get to see what she did for the day. 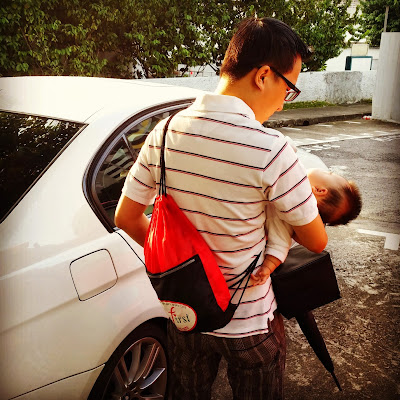 After weeks of waiting, Emma's hairbrush is finally ready. I love the 2 quotes that we came out with :)
父母授乳笔 同写主恩典 & 凤羽芊绵 惠风和畅. The second quote has her Chinese name! Now, I just got to print out a couple of photos and stick it on the right side of the hairbrush before getting it up the wall. 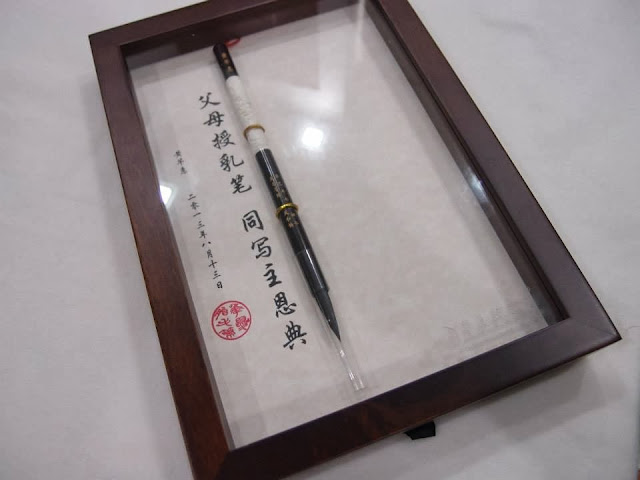 We shaved her at Week 7 and her hair has already been growing well (other than her ring of 'aunt road' at the back of her head). I can't wait for her to have longer hair. 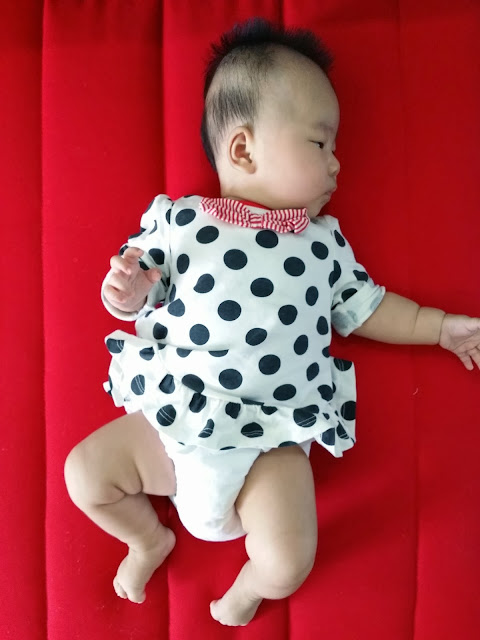 Shiro also joined in the fun and had her first shave weeks ago. She looks rather cute in her new hairstyle. hehe. 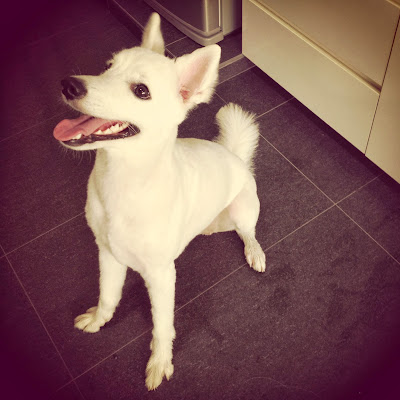 The Lord is my strength and my shield; in him my heart trusts, and I am helped; my heart exults and with my song I give thanks to him. - Psalm 28: 7﻿
Posted by Ashlyn Thia