Each month has its challenges and Emma was down for 3+ weeks since she turned 7 months old. It was a pain to see her so uncomfortable and sick. Other than her passing runny nose at 6th month, this was the first time she fell really sick. In comparison to hubby, I was more worried, anxious and paranoid. He was so calm and composed, and I believe we certainly made a good match. :) We are really glad that she has recovered and hopefully a little stronger than before. 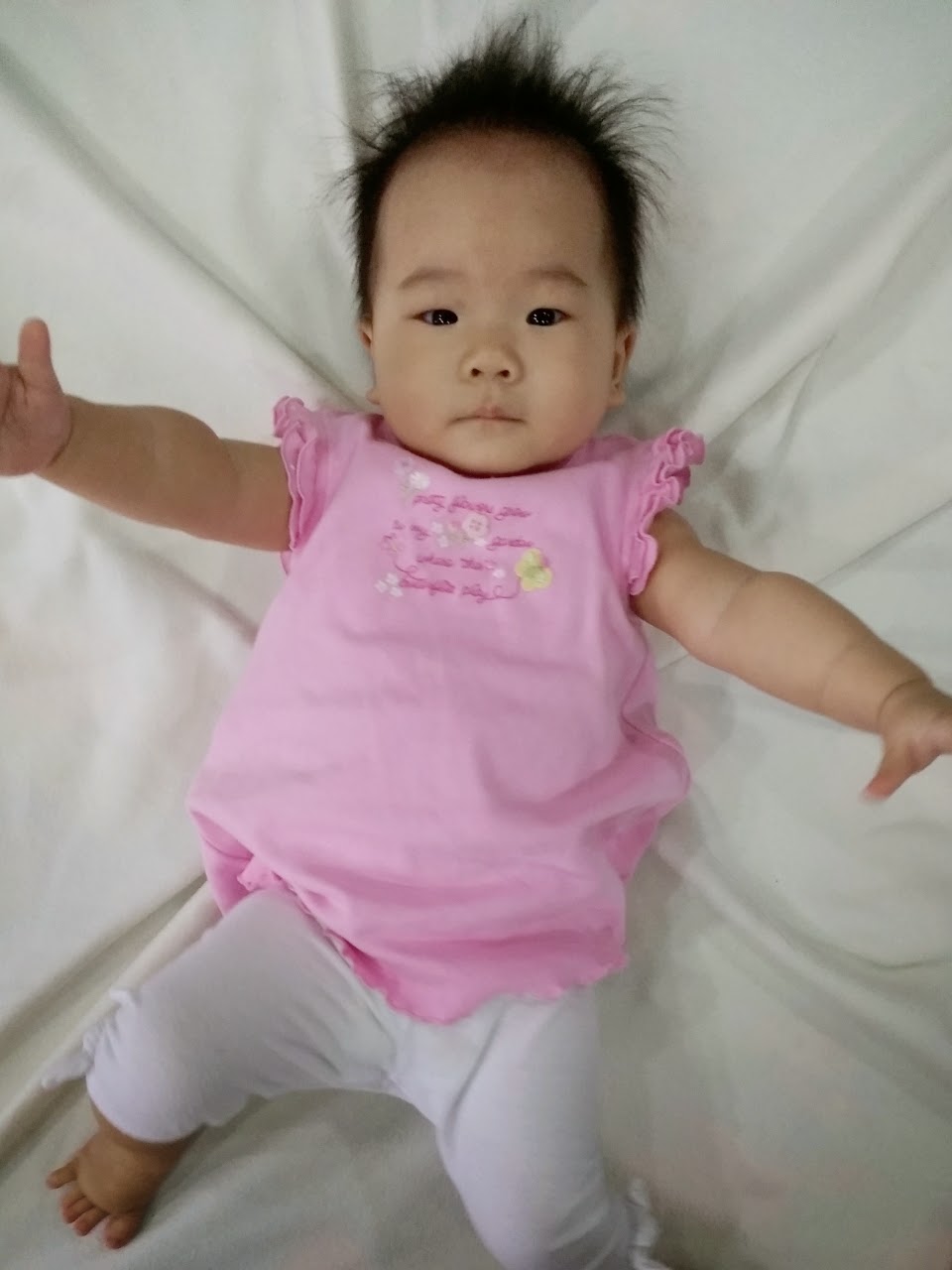 Statistics: Emma has gained 0.4kg and was 7.1kg when she turned 7 months old. It's quite a good increase considering that she hasn't been gaining much (around 0.2kg per month) for the past 2 months and she was sick for a long 3+ weeks. Am not too sure about her height as there is not checkup and it's rather hard to measure using a measuring tape. 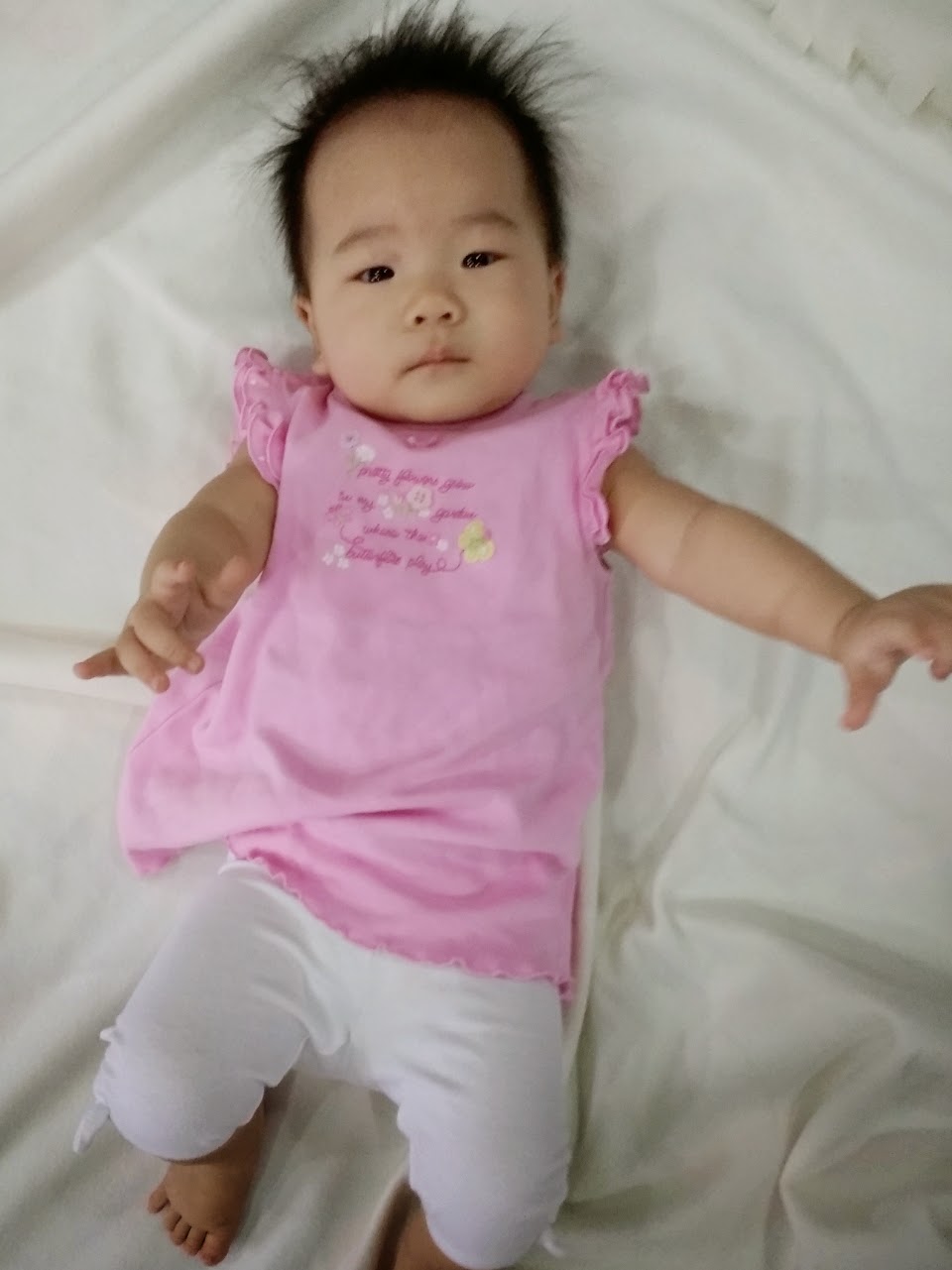 Health: Emma was coughing since the Sun before she fell really sick. Her cough got worse on Wed and had raised temperature. She wasn't having fever so we could still send her to school. Towards the later part of Wed, she developed fever when she was in ifc. Fever subsided when she came back home. Her temperature was slightly high throughout the night. Hence, we decided to keep her home.

She was fine during the day but her cough turned barky in the afternoon. It sounds bad and worrying. It was late when we settled her down and the neighbouring pd was closed. After checking with other mummies, we decided to wait till the next day to bring her down to pd instead of heading to A&E (waiting time is rather long). We let her slept with her so that we could watch her from time to time. I was so worried that she couldn't catch her breath. She didn't really sleep well due to her phlegm and blocked nose.

We went down to pd on Friday and pd said that her nose is blocked and throat has phlegm. Gave her nose decongestant, medicine for runny nose, phlegm and swollen throat. She was more comfortable after the medicine but was still hard to soothe. She took medicine for the following week and was getting better but not recovering totally.

We brought her to see Chinese sinseh at Herbal Basic as she was still not well after 1+week. The treatment consists nose therapy and baby tuina. After the treatment, she coughed out/vomited out phlegm and had much nose mucus. It supposed to help in recovery by removing all the mucus and phlegm. We went on Sat, Sun, Tues and Sat. During this week, she kept waking up at least once at night and both of us were so tired. Fortunately she was getting better after 1 week of treatment. During the first 2 weeks, she would at least coughed till she gagged out all her milk especially in the morning. Thus, my concern for weight loss.

On Sun, church mates recommended me EYS bao ying dan as she was still having phlegm. After 4 doses, she was finally well. I would say it was rather effective in 'dissolving' the phlegm.

Emma also loose bowels for a several days but it doesn't seems like diarrhea and she had no fever. The Herbal Basic sinseh said that it would be due to teething. She doesn't seems too uncomfortable so we just monitor and make sure she drinks enough. 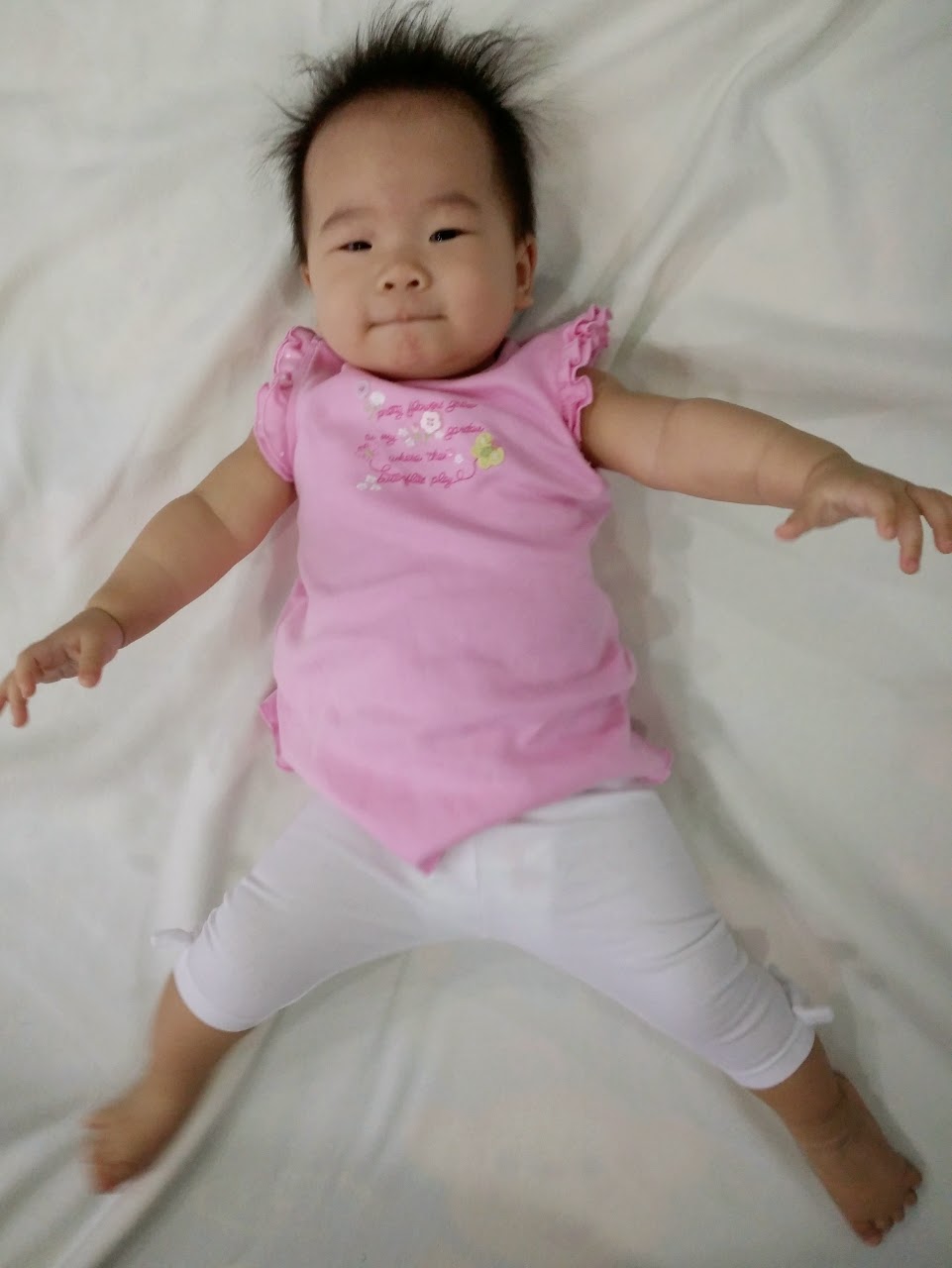 Diet: Emma now takes 4 bottles of 200ml, 1 bottle of 100ml for her 10-11pm dreamfeed and porridge for lunch. After Emma recovered, we moved her from 3.5hrly to 4hr routine as we realised that she isn't hungry when we feed her 3.5hr later. After moving her to 4hrly, she could finish all her milk and faster. She used to take 5 bottles of 150ml = 750ml and with the new routine, she takes 900ml. She could go without the last bottle of 100ml, but we still give her so that she would gain more weight after her almost daily vomiting out a full episode. We are glad that she managed to gain some weight in 1+ week.

She started porridge few days after she turned 7 months at the IFC. It came a surprise as we aren't informed by the teachers in advance (probably due to her 2 days absence). I was rather upset as I wanted to be the first to feed her porridge. Besides, the ifc don't follow the 3 day rule of introducing new stuffs and she gets to eat different stuffs everyday. I was really worried of any allergic reactions. However, after about a week or so, she was safe of allergy and I am glad that she has been exposed to quite a number of stuffs. I have lessons on one of the weekends and following weekends were spent on rushing assignments, hence I didn't have much chance to introduce new food. If not for the school, she wouldn't have tried out so many food. The menu includes porridge with fish or carrot, ikan billis, tofu, spinach, pumpkin, broccoli, potato, sweet potato and cauliflower. She has also tried apples, banana and papaya. She had half a small bowl when she takes 150ml milk every 3.5hrly and slightly lesser when she moves to 200ml milk every 4hrly as her milk feed was closer to lunch. There shouldn't be much of concern as milk would provide the main nutrition with solid food as supplement until baby turns 1 year old.

She had some happy baby banana puffs and teething rusk. She enjoys the banana puffs but Hubby decided to stop giving as he worried that she would choke. As for the teething rusk, it hard as rock so I guess I would give it to her when she has more teeth. 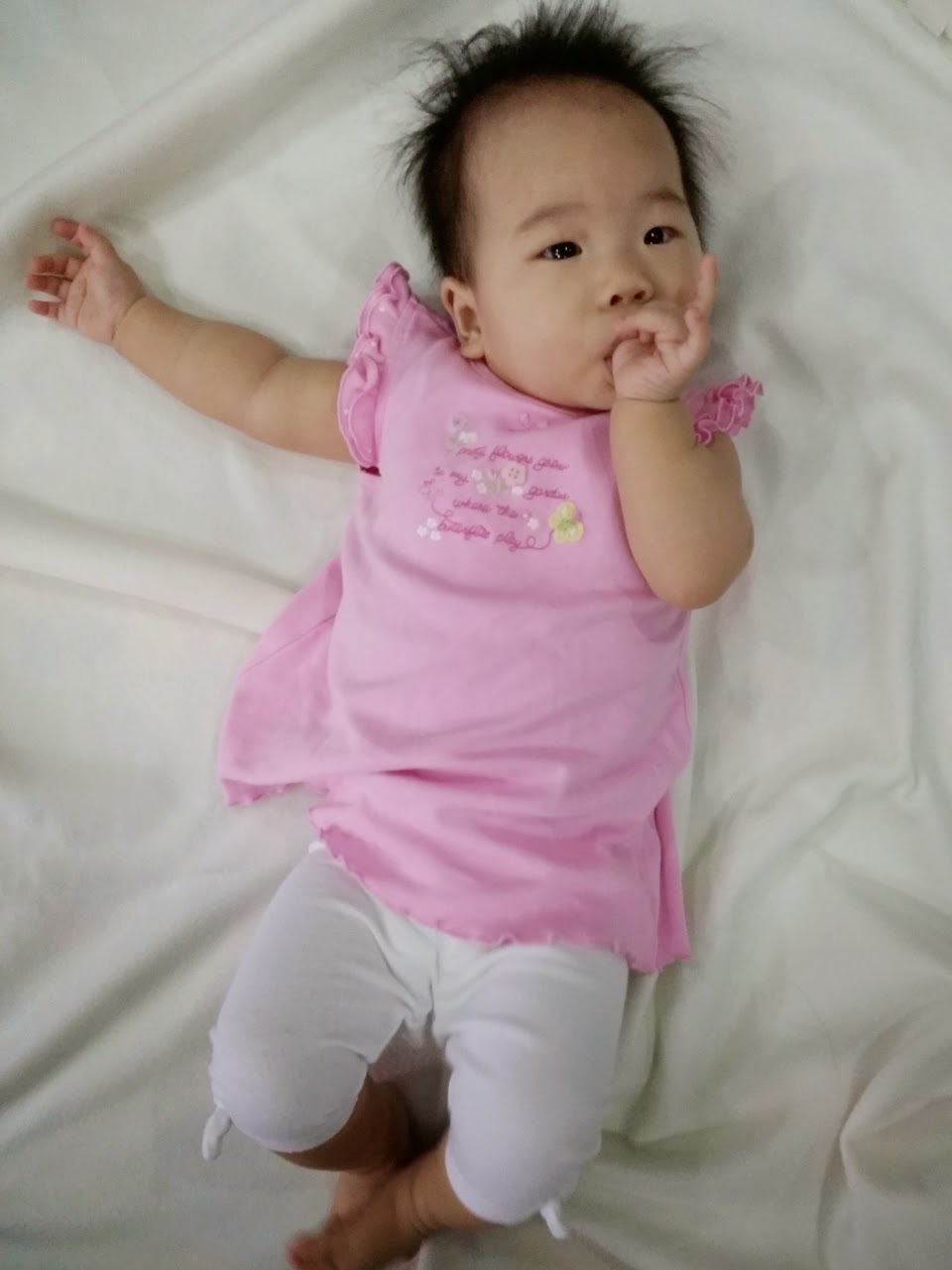 Sleep: She has been sleeping fine other than the first few days and 2nd week when she was sick. She woke up at least once a night for 4 days and went back to normal thereafter. Another reason for moving her to 4hrly feed is to let her sleep more. She slept at 9pm and wakes up at 6pm when she was on 3.hrly. And now she sleeps at 8pm and wakes up at 7pm. However, she didn't sleep as much during the daytime. She would nap for 45-90mins for 2-3 times. I realised that she would rather play than to sleep during the daytime. For instance, she would stay awake through her naptime when we are out having lunch and knock off in her carseat even before we exit the carpark.

Social/Outings: As she was sick and I was overwhelmed with school/assignments, the main outings were to Herbal Basics, church, parents, in-law's place and IMM for nephew's birthday celebration. She also went to visit her great grandmother who was at the hospital when she was almost recovering. 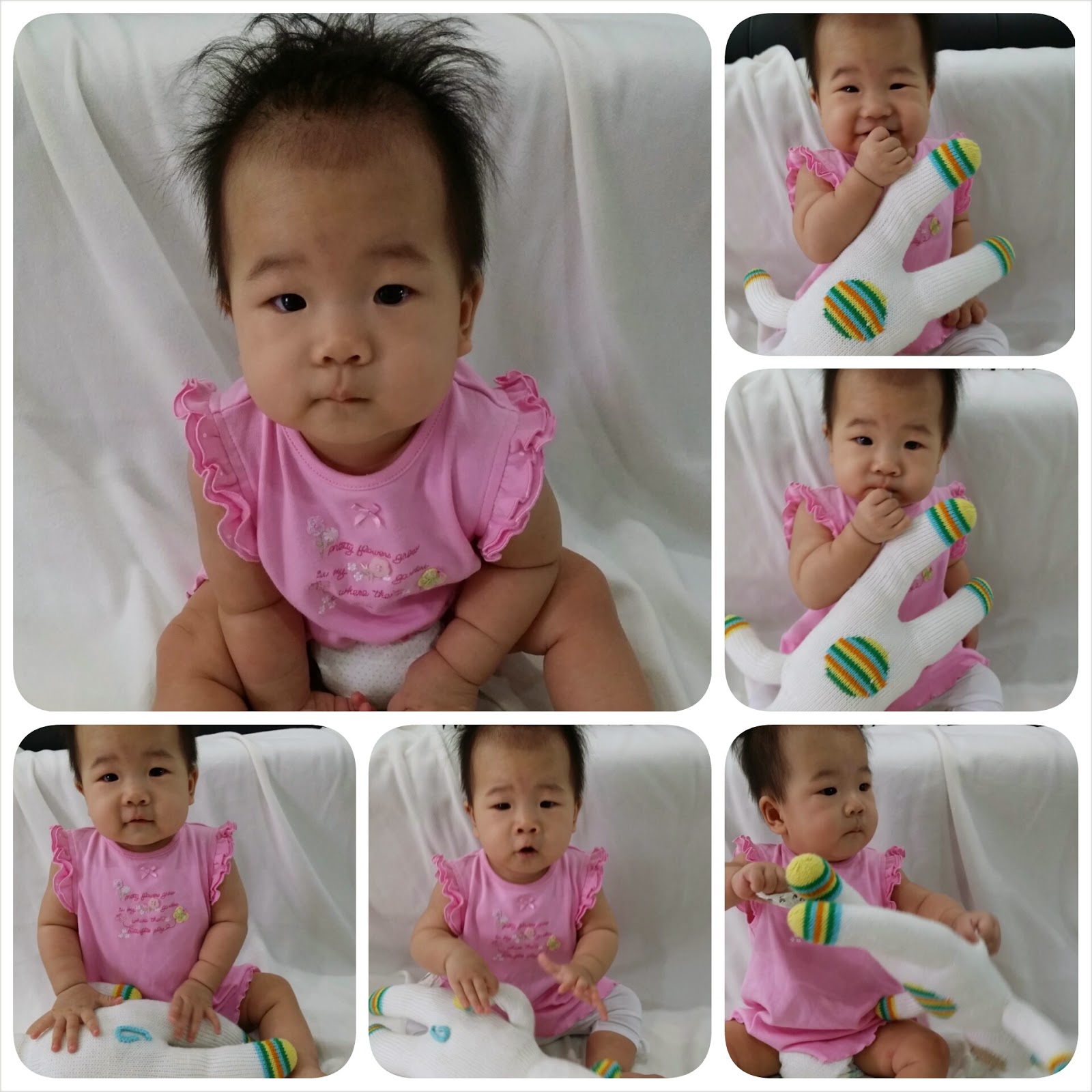 Activities: Emma is active. She loves to crawl around, hits and bites stuffs. She would crawl towards us when we call for her or lure her. She picked up a new hobby of waving and she is certainly gaining better control of her hands and arms. She is also making more sounds and laughing a lot. She loves it when we surprise or boo her.

She had her 2nd haircut by yours truly. Haha, I trimmed her sides as it was covering her ears and neck that she kept pulling her hair. She has strong bite and it even left light marks on me when she wanted to get away while I cut her nails. 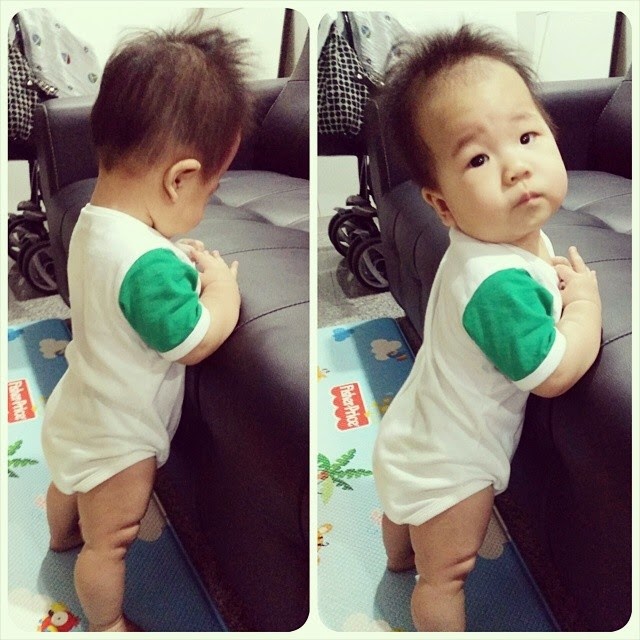 Milestones: Emma is able to sit on her own with quite good balance. However, I tried not to let her sit up on her own for too long as she has yet to get up to the sitting position by herself. She is also able to stand on her own while supporting onto our sofa.

Postpartum: It was a depressing, stressful and tiring month, I seriously don't know how I survived through without the strength from God and Hubby's support. I fell sick with flu and sore throat after she recovered. Thankfully I recovered before my school final assignment presentation. I am thankful for all things as God helped us go through this phase.

I have finally completed 46.5hours of lessons, 3 assignments, many other case studies and presentations in 3 months and am now less than 4 weeks to my exam. It will be an open book exam and we are given the case to prepare in advance. However, it seems quite challenging to complete the questions in 3hours when we usually takes days to finish up. Anyway, it's the last paper and I just going to continue to depend on the almighty and finish it well.

The Lord has done great things for us, and we are filled with joy. Psalms 126:3
Posted by Ashlyn Thia