The past month has been a quite worrying and faith testing as Emma has been battling with bites, swollen limbs, blisters. Thankfully, she was still cheerful and wasn't bothered by the them. She is likely having allergy to bites and we are still monitoring. Nevertheless, it was still a very hopeful new year! Statistics: Slow but steady, Emma has finally crossed the 9 kg mark! She has gained 0.3kg over the past month and weighing 9.1kg. Definitely getting taller as she is grabbing all sort of stuffs from the kitchen top (slightly higher than our dining table) when she tipped her toes. 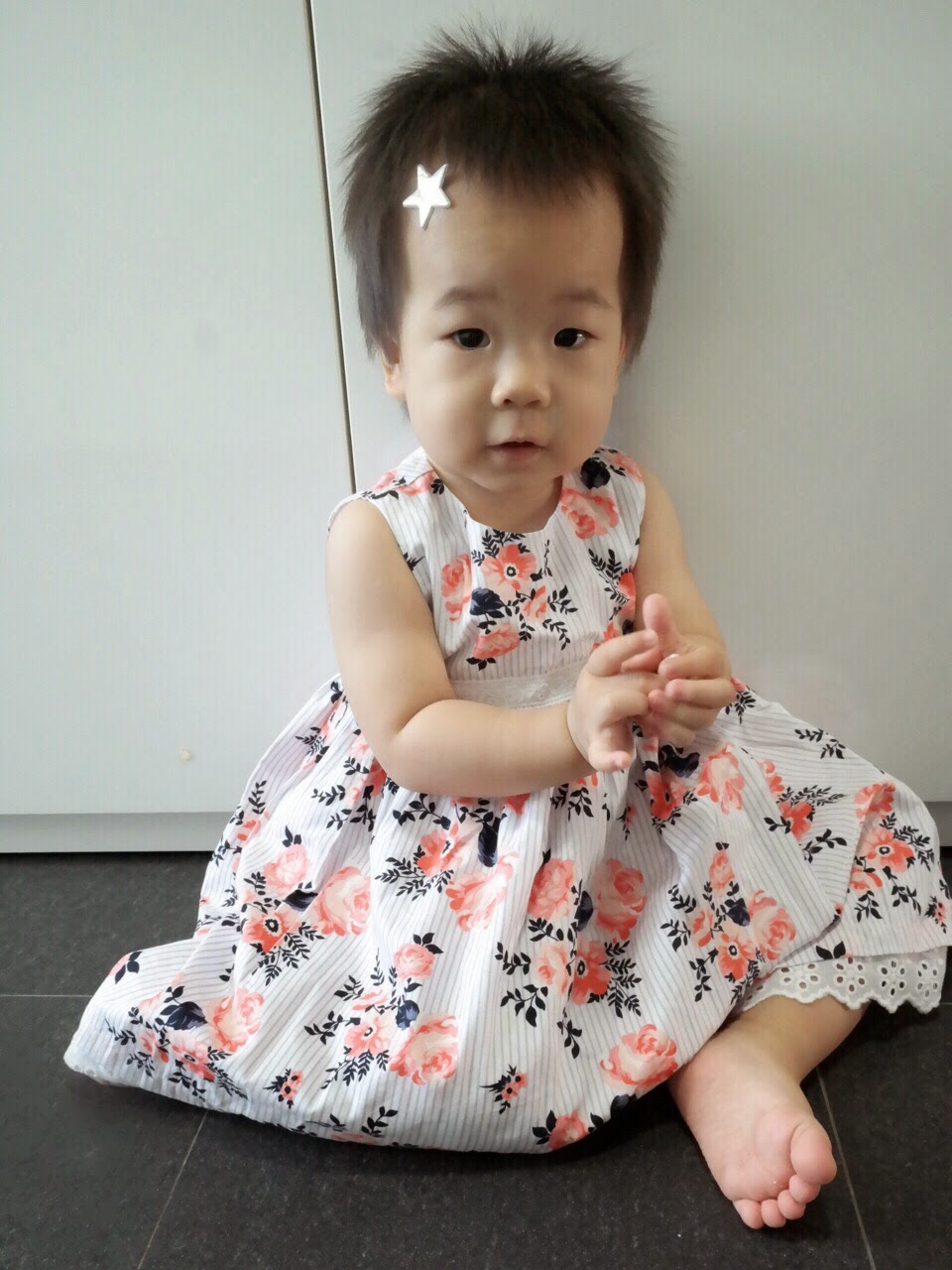 Health: She isn't exactly sick but she had 2 major and several small bites/bumps issue. She got skin infection over her left lower arm (swollen and blistered but no fever) on 21 Dec last year and was given antibiotics (Augmentin again). Then on the last day of 2014, she got another bump at her left lower leg. Similarly, it swelled and blistered. She then had fever for a day. We went to see another PD and was given steroid cream, antibiotic cream, paracetomal and zyrtec. She always have persistent bites, and I think she has some sort of allergy to bites. It's quite troubling but we just got to keep close monitoring of her body and probably get an appointment with some skin specialist.

She also had another small accident in school. Her school mate sat on her while she lying down drinking milk and she had a bruise on her face. Thank goodness, it quickly recovered. 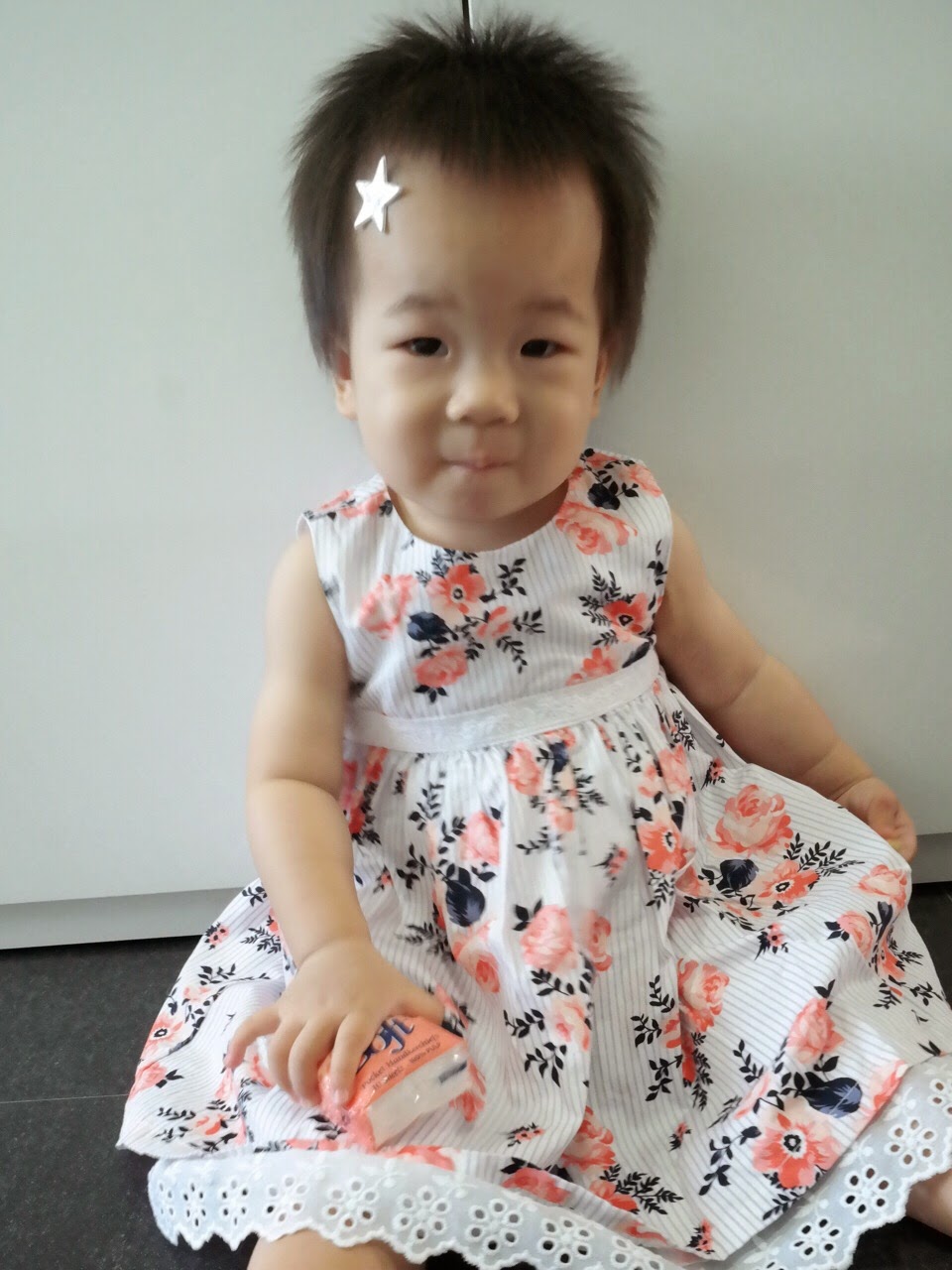 Diet: She is still on same routine but we probably need to change it once she hit the playgroup when she turn 18/19 months. She has learnt to spoon feed herself and practise it only when we are home eating. She uses OXO plate and think it is really a good buy. It has a ring to guide the food and weighted non-stick base that keeps the plate on her table. She has also started to drink from water bottle, but still not really good at it. We introduced mushroom, grapes, cheese, water melon and ice cream (2 mini spoonful - just for fun)!

Sleep: Emma is still sleeping at around 9pm to 7am. However, we had a change in routine, Daddy has been putting her to bed these nights. There were a few nights that she refused to stay on the bed with me and kept fussing to leave the room. Thus, Daddy took over. This gives me more time at night to do the house chores and some me-time! Yay, thanks dear! 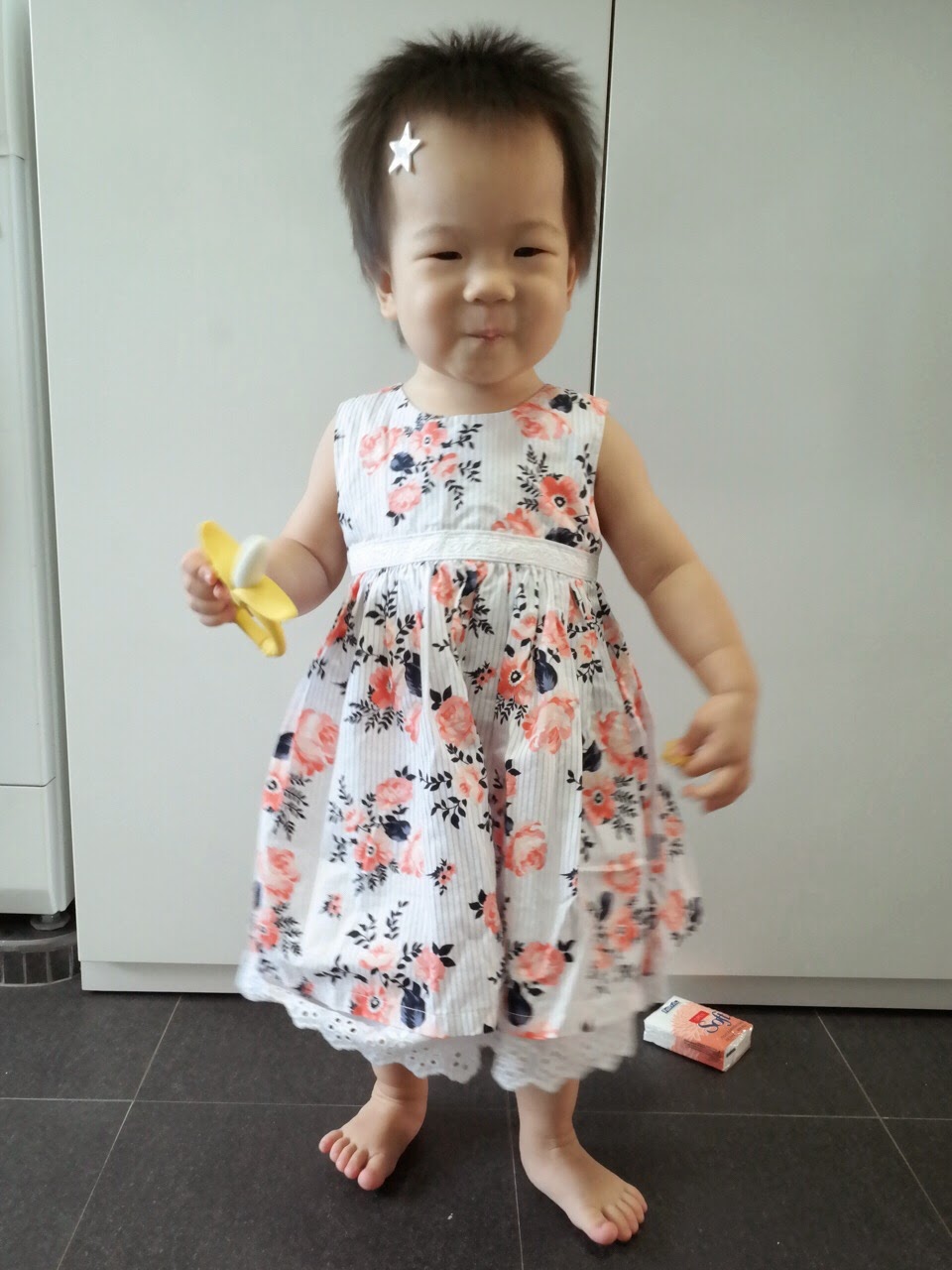 Social/Outing: It was Christmas and we went for some sightseeing at Orchard Road and Changi Airport. It's so crowded at Orchard! I think we probably would just stick to the west on weekends. We attended a wedding where Emma met her "prince charming". She received her first flower from a handsome boy and he even hugged her! haha. We also had great Teppanyaki Christmas gathering! And I get to meet up with my dear CHAOS for our year end gathering too! 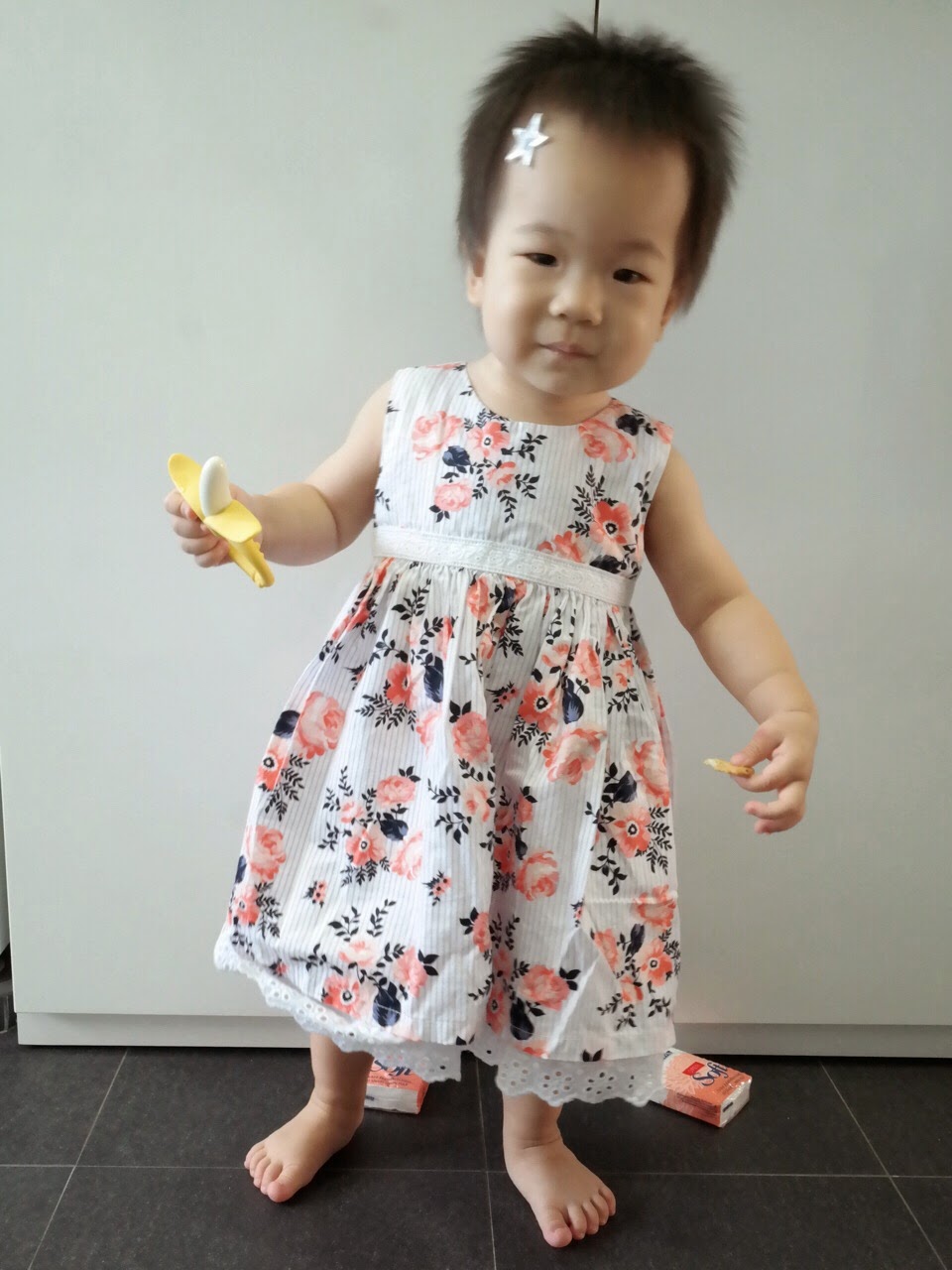 Activities/Milestones: She still love peekaboo. And lately, she fell in love with dressing up. She would hang ribbon around her neck and carry a bag then say bye bye. I think most kids like a little excitement, Emma enjoys being thrown into the air, sit on Daddy's shoulder and fly like airplane. She loves to paste stickers on her head, hug soft toys, play/feed soft toy. It's amazing how she can recognize each of them when we call her to bring them over.

Emma is getting and climbing everywhere she wants. She dances, sways and turns around when she hears music. She could now step down without support, walk on tip toes, walk and stand on his giffare toy ride. I dread the day she starts to climb up the gate.

She impressed us once again by saying "Emma" affirmatively when we ask what is your name. I didn't expect her to know her name. She also hums songs when we sing and during church worship. She managed to whistle for a few days and stop trying.

She remembers songs with 1 or 2 actions like pat a cake (pat her hands), 5 little monkeys (bump her hand and sign no more jumping on the bed), 种子 Christian song (plant a seed on her palm and grow the seed), head and shoulder knee and toes (points to toes and say toes), if you are happy and you know (clap and stamp feet). I'm sure the teachers have taught few more songs which we aren't aware of.

She is picking up actions fast too. She points to her toes, stamps her feet, signs two, places hands behind the back, self feeds, points the thermometer to her ear to take temperature, presses things like washing machine and PC, do gong xi gong xi, places one arm over the other elbow & move up and down for elephant and do poo-ong action.

We started on the A-Z project and is now at C! She is learning and recognizing the pictures faster than I expect. I give her stickers or object to place on the pictures instead of just getting her to point at them. 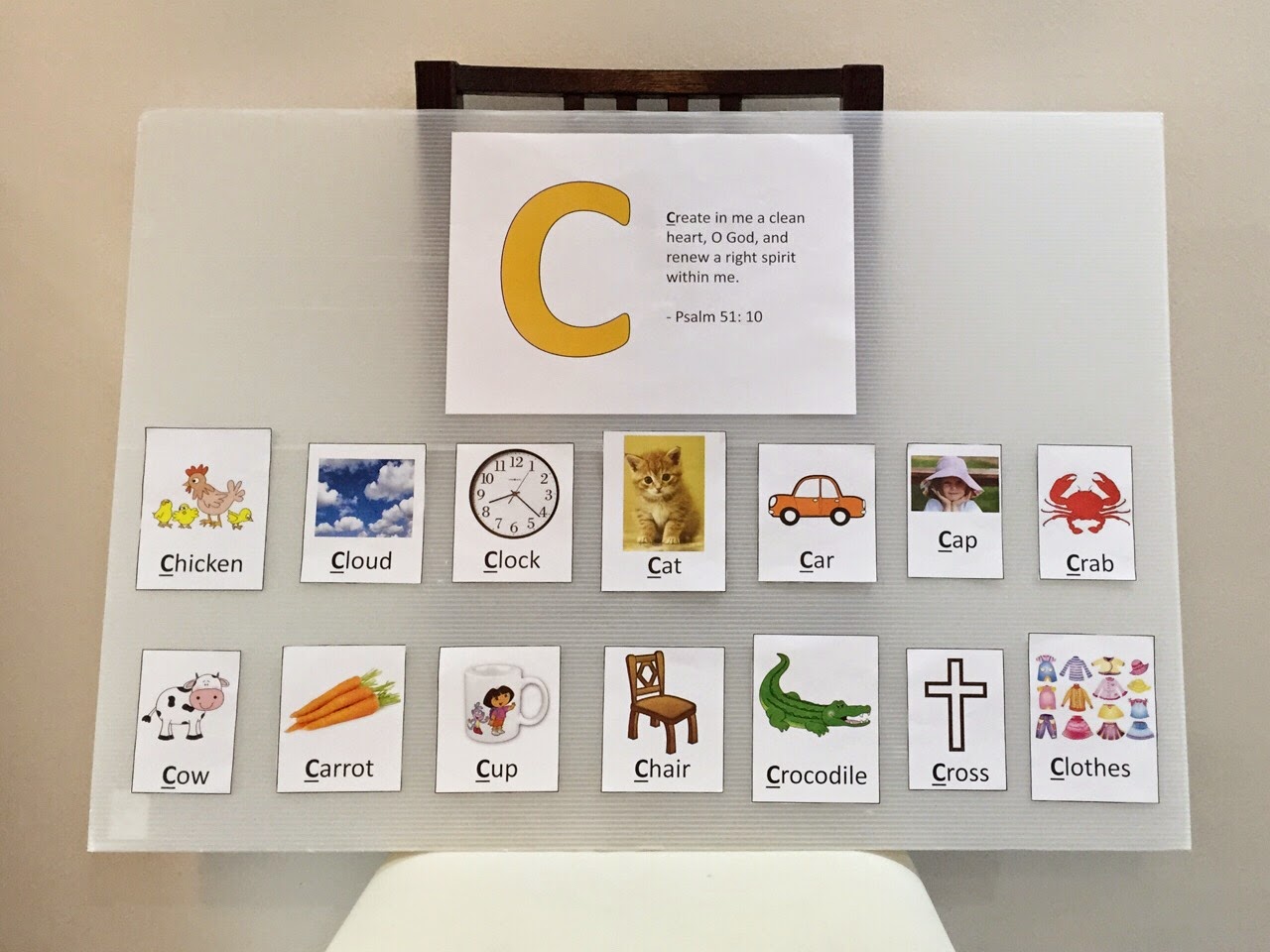 Mummy’s update: A great year went by and I'm glad to set aside some time for a couple date with some reflection and prayers before the end of the year. Time flies with a kid around and I wish that 2015 will be a more fruitful one! Work is getting busy with a new semester, I pray that I would be able to cope well.

Prayer for this week! Create in me a clean heart, O God, and renew a right spirit within me. Psalm 51:20