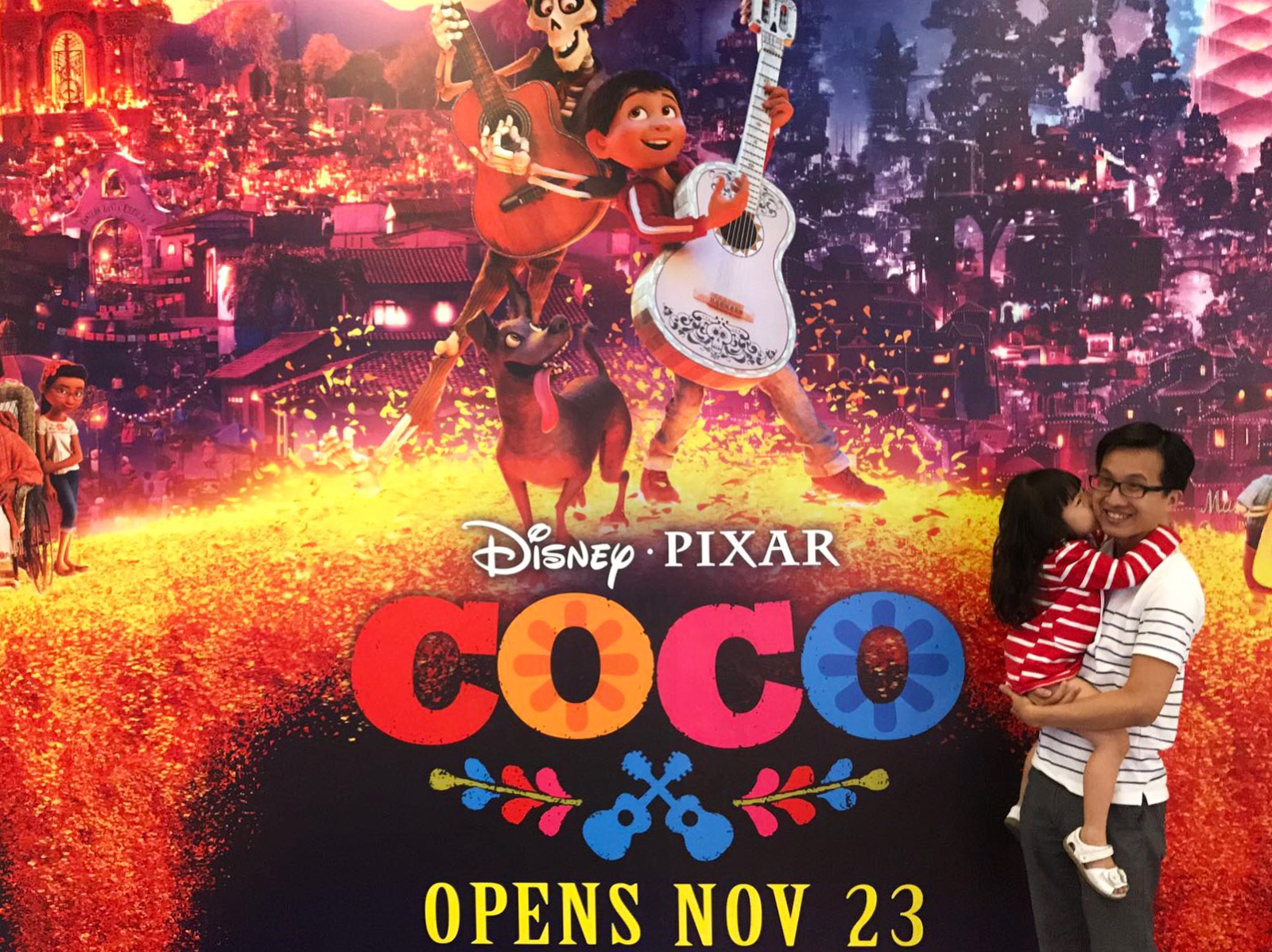 When the posters for Coco first appeared on the bus stops and buses, I wasn’t really keen to bring Emma to watch. It was mainly because I know Emma will be scared of the skulls and skeletons, and wasn’t sure how she would react. Even after dressing up for Halloween this year and taking part in "trick or treat" with our neighbours, she is still afraid of some of the Halloween props.


But luckily we brought, A, Emma’s best friend and “jie jie” from the same class to watch with Emma this time. Since the movie name Coco seems “cute” and catchy, Emma was really excited about watching the movie with her best friend. However, we could feel that she was scared.

As expected, Emma was scared and she wasn’t ready to take photos with the scary-looking posters when we were there. It was only until A pulled her along. Emma reluctantly walked up to take the photo. It wasn’t the best photo but hey, we need memories right? That’s also what the movie Coco is all about.

The cinema lobby was also filled with cinema-goers dressed in colourful traditional Mexican costumes and painted skull faces. It was such a nice scene but that scared Emma even more. Again, A was there to entertain her and keep her focus away from those “scary people.”

Continuing the tradition of Pixar movies, there is a short Frozen film before the start of the movie. Frozen lovers, like Emma and countless little girls, will also be happy to know that there’s a 21 minute mini-movie Olaf’s Frozen Adventure. After the mini-movie, I told Emma that the movie has finished and we have to go. But, she’s smart enough to say that’s not Coco movie and it haven’t started. She’s growing up too fast!

After watching the movie, here’s what I’ve learned from the movie.

Parents influences their children's lives. For better or worse.

The colourful show started off with Papel Picados explaining why Miguel’s family (yes the boy is not Coco) bans and hates music. Miguel’s great great grandfather left the family because of music, the matriarch then banned all music, beat, instrument in the house and starts making shoes. The ban of music was then passed down through generations all the way till Miguel.


It’s pretty funny. Looking back at my own family, how many times did our parents or we as parents told the children "no" to this or that. The story totally nailed it, especially for Asian families. Have I been supportive of my child’s choices or was I against it? It makes me wonder how I can help the girls with their choices with them growing up so fast!

Halloween in Mexico? No it’s more than that! Day of the Dead (Dia de Muertos) is a public holiday in Mexico and it is about remembering your family and friends who have passed away. Altars are brightly decorated with papel picados (paper cut outs), calaveras (skulls) and Mexican marigolds (the orange flower bridge seen in the posters). We get to learn about a new cultural holiday by watching a movie. It’s killing 2 birds with one stone!

Listen to your Family

Young Miguel ran away from his living (and dead) family to pursue what he thought was correct - that's to pursue music. Somehow, that cursed him and he was stuck in the land of the dead where all the adventure (trouble) begins. Well, these could go 2 ways. If Miguel did listen to his family, we wouldn’t have a movie right?

In every family, everyone has our opinions, principals and tradition. But as long as all of us communicate and listen to each other, things can be worked out. While the movie does teaches children to listen to their parents, it is also equally important for parents to listen to your children. Because, your children are also your family.

Photos and memories are important!


Hector, whose only dream is to cross the Marigold Bridge to visit his daughter, can’t cross over. So did Mama Imelda (Miguel’s great great grandmother) due to an accident by Miguel on that fateful day. Oops!

The only way for the dead to cross the Marigold Bridge to visit the living is to have their photos displayed at their family’s home. The land of the dead has a facial recognition scanner to verify! Hector’s daughter was slowly forgetting her papa because she does not have his photo. This is a very important plot of the story - if no friends or family remembers you, you will slowly disappear. The movie calls it the “Final Death”.

I’m not promoting selfies, but how long can our memory bank can last? Emma may be scared of taking photo but this was her first movie with her classmate. And no living skeletons or ugly tucked-in T-shirt can stop us!

Emma also loves to see photos of herself and sometimes she would ask us where we were, what were we doing and so on. She laughs at herself most of the time and finds herself too cute. When she grows up and look backs at her photos, she will probably be embarrassed but we’ll laugh it out.

Remember INSIDE OUT where Riley’s childhood memories and Bing Bong started to fade off. Fortunately for us, in this era we have digital photos to help us keep our memories alive.

So, just create as many memories as possible! Memories of our children with us and our grandparents will fade. Even for us as parents, sometimes a photo is just what we to remind us of the people who has loved us since the day we were born.

What’s Emma take of the show?


As usual, Emma was scared most of the time. But the surprise came at the tear-jerking moment, Emma, who was sitting on my lap, turned and hugged me and cried saying “I missed MAMA”. Even the lady beside us turned around (with tears) and smiled. I didn’t expect Emma to understand what was happening. But, surprisingly, she got it.

Emma also managed to catch the song “Remember Me”. One day after the movie, she said she wanted to listen to the song. For a little girl who only loves princess songs only, I must say that this song had impacted her.

Should you catch the show?

Yes because it's a Disney Pixar movie! Besides that, Coco actually portrays deep family values, dreams and culture. There were a lot of scenes that touched my heart. The characters shared the same tradition as Asian, particularly for me as a Chinese.
The movie also reminded us how we want our stories to be shared by future generations.
Will we be the one who abandon the family for our own dreams and never came back?
As parents, are we the ones who supported the dreams to be who the children want to be?
What is our family tradition and why we had this tradition?
How will my children and grandchildren tell our stories?

Parents only live as long as our children remember us. So until they’re in our arms again. Remember Me!

Coco opens in all cinema on 23 November 2017. Don't forget to bring along your tissues!