It's amazing what a little thumb can do. Other than all the hand movements, it helps Emma to soothe herself rather easily and effectively. Hence, she rarely need our help as her precious thumb is always with her to comfort her.

We tried to pull out her thumb when we see it but she has been getting really addicted to it. She didn't like the pacifier since she was young. Even though pacifier might affect the teeth alignment, it is said to be easier to quit than the thumb. We tried 3 so far and none ever stay in her mouth for more than 3 mins. She still prefers her thumb. I read that as long as child quit before her permanent teeth set in, it will be fine. Besides slight soreness is normal. So, it was very worrying when we see how bad her hand condition was.

Weeks ago, we realised that she was sucking more since she was rather unwell due to the jabs and her left thumb was sore. We bandaged her left and she resort to her right. Left thumb recovered but the tender skin on her right suffered. So, we let her switch back to the left.

Soon after, we saw that her left thumb was swollen and so we started bandaging her left again on Saturday. Apparently, she was sucking quite hard and made a cut on her thumb with her teeth. As she suck, she introduced more bacteria to her cut and this led to the onset of infection.

It got worse with more swell on the next day. Hence, we bandaged both hands to stop her sucking and we brought her to pd after church service. Pd pricked and drained the pus. She prescribed antibiotics augmentin and antiseptic cream. While waiting for the pd..

She was feeling well but her hand still looked about the same so she went ahead to school on Monday. Then sometime afternoon, we received a call to inform that she had low grade fever and her hand condition seems worse. Thereafter, we were advised by the pd to go the hospital as she might need to be admitted and have her pus removed.

After packing all our stuffs, we headed to NUH at 9ish since it is near our home and there is a children A&E. We saw 2 doctors of which one is specialised in the hand. To our horror, he told us that she would need a surgery with general anesthesia to remove the pus. There is so much risk involved and we really didn't want her to go through any surgery if we could. We just prayed and ask our friends to pray for her too.

Emma took a quick nap before we got up to the ward around midnight. Another doctor came to take a look at Emma. She asked for x-ray, an iv plug to be inserted, started her off antibiotics (3 times daily) and asked to fast her in case there is a need for operation. The insertion of the iv plug was such a traumatising moment. Emma was crying so badly, she didn't like to be restrained and there was nothing we could do to comfort her. It took 3 pokes and 50 mins to complete everything. But the crying stops there and she was fine right after. We are glad that she was pretty comfortable with the iv plug on her right hand.  I stayed over with Emma and we finally get to sleep at 4am. 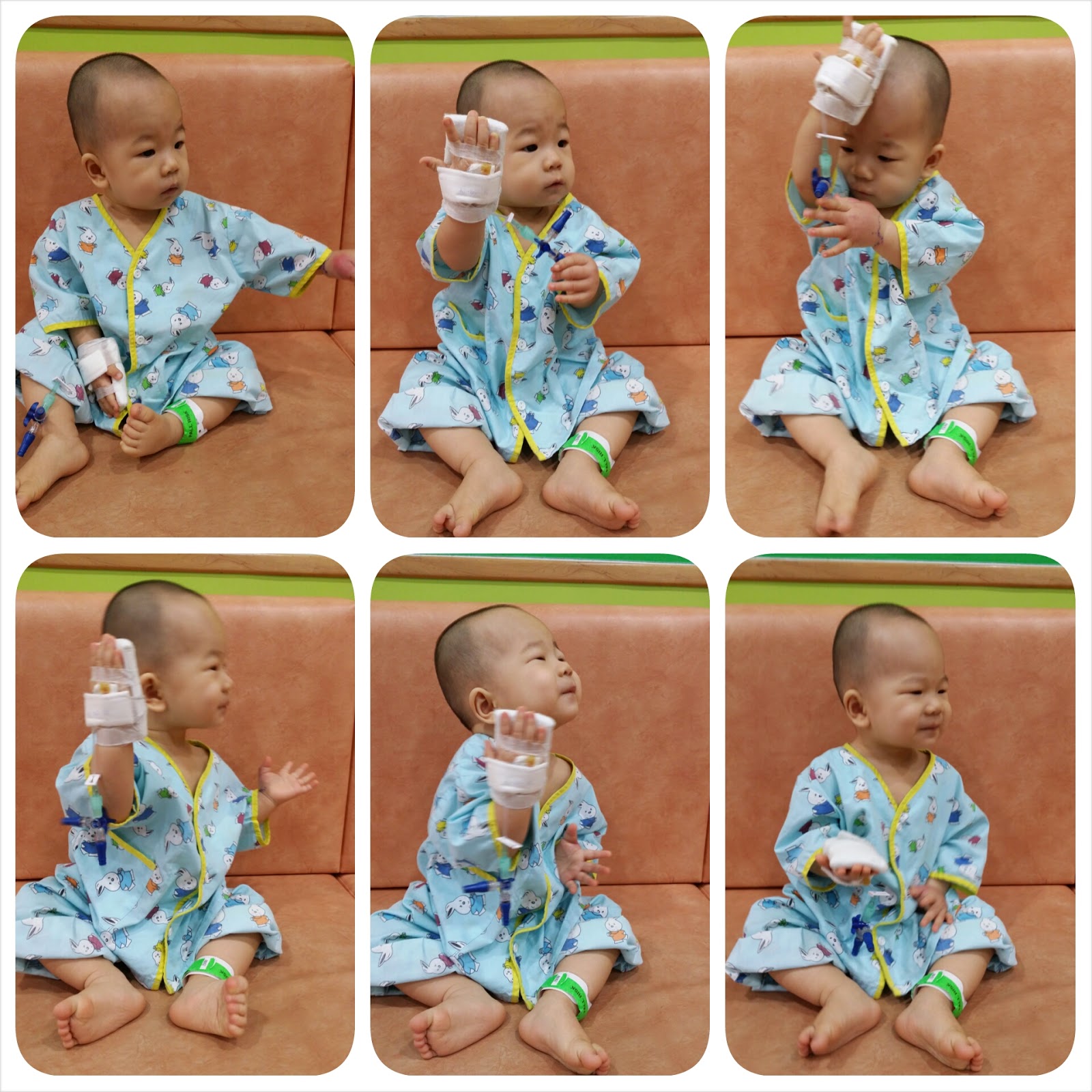 Photos taken on Tues, still so cheeky and checking out the iv plug!

Consultant, Dr Andre Cheah, came for review on early Tues morning and gave us 2 options. We could either continue with antibiotics, wait and monitor to see if there is any improvement or operate on her thumb to remove the pus. Since it is hard to keep the young child still with local anesthesia, they will need do a full body one. The cut will be the length of her thumb, the wound need to be left open (unstitched but bandaged) for a few days before stitching it back. It will then be bandaged until it recovered. Not forgetting to mention that it has risk of more infection if wound didn't heal well. It sounds really scary and Dr Andre was very hesitant to operate on her as well. After discussion, we all decided to wait as Emma was still active, happy and doesn't seems to be in pain. She didn't even whine or fuss when the doctors examine and touch her crab pincer-like hand.

She was allowed to take her first milk at 8am and fasted again until the next review. He and his team came by in the afternoon and her redness at the back of her hand starts to go down. He did a marking on her hand for easy comparison. After review, he decided to hold off the operation, let her take her milk and get her to fast again before the evening review.

Her swell goes down by a wee bit in the evening. So, Dr Andre asked if we are still ok to wait till Wed morning and we agreed. She took another 2 milk feeds and fasted overnight. (She was quite fine with the fasting since she doesn't drink at night). She slept fine with occasional wakings as there isn't any thumb for comfort. 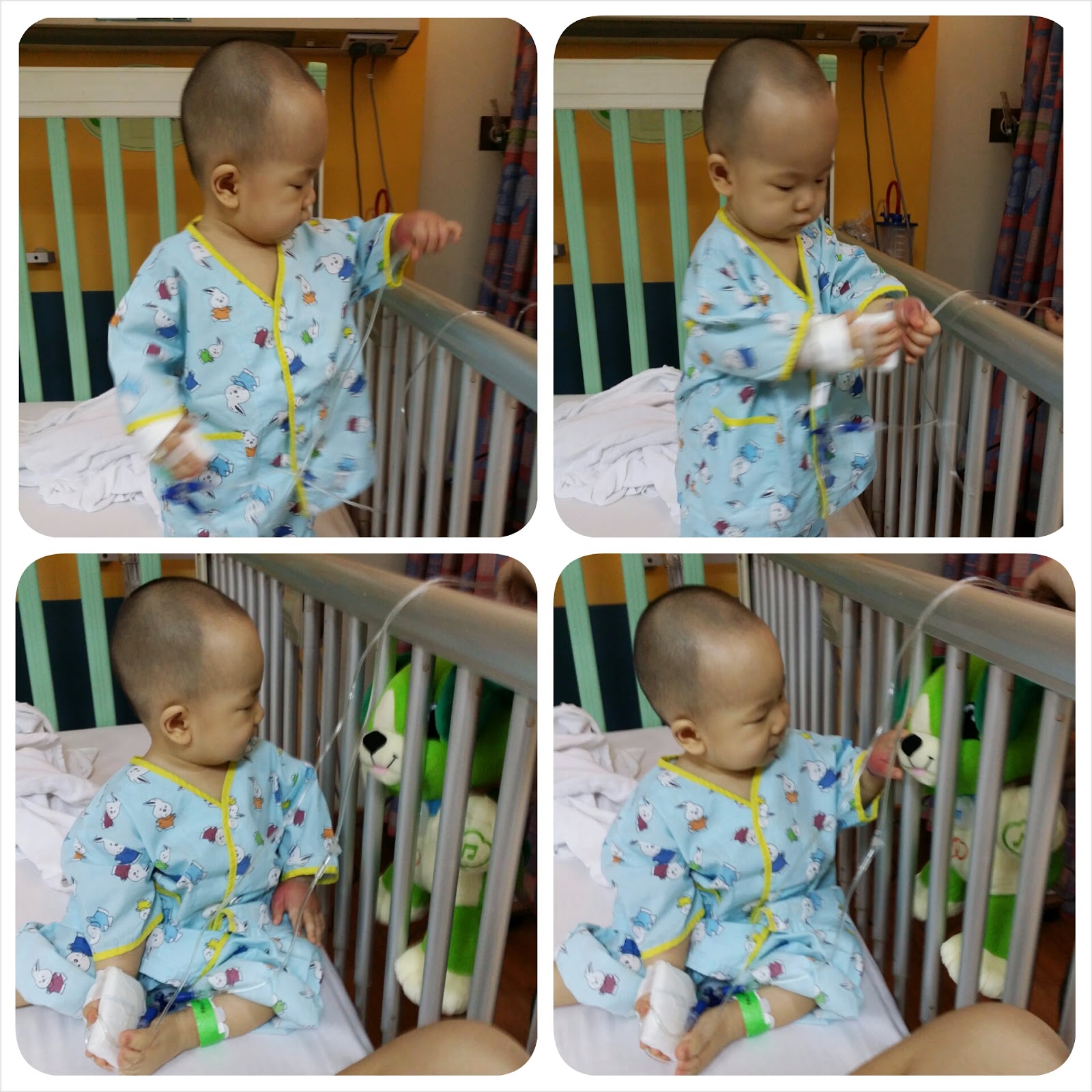 We brought scout puppy and many books to keep her entertained. We also walked around the playground and medical centre for a breather!

There was more improvement on Wed and there is no need for operation (oh yay! ). But Dr Andre advised to stay on another night to see if the redness on her thumb goes away and he did another marking. This round, she doesn't need to fast anymore and could take her milk. 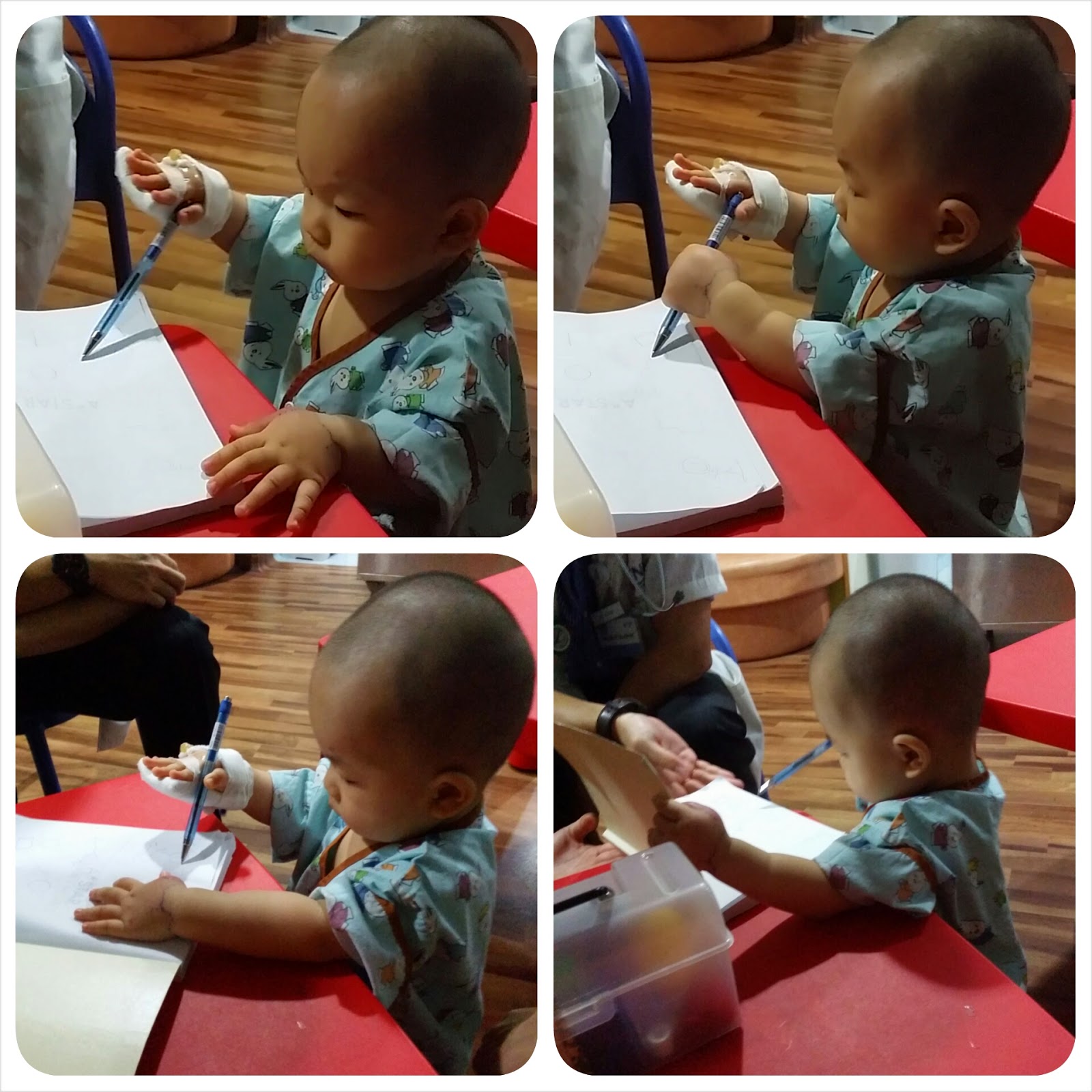 Having fun doodling with pen just before the plug got off. She had fun with the medical students who were doing child development study.

Her iv plug was blocked when the nurses were administering the the antibiotics at night. They tried to reconnect it back but I eventually told them to stop since Dr said she could take oral antibiotics if the plug gets off. It was such a pain to see her burst in tears when they were meddling with tubes.

On Thursday morning, Dr finally gave a green light to discharge in the afternoon. We are so happy to escape from the operations. The redness was still there but lesser. She was prescribed with antibiotics for another week. 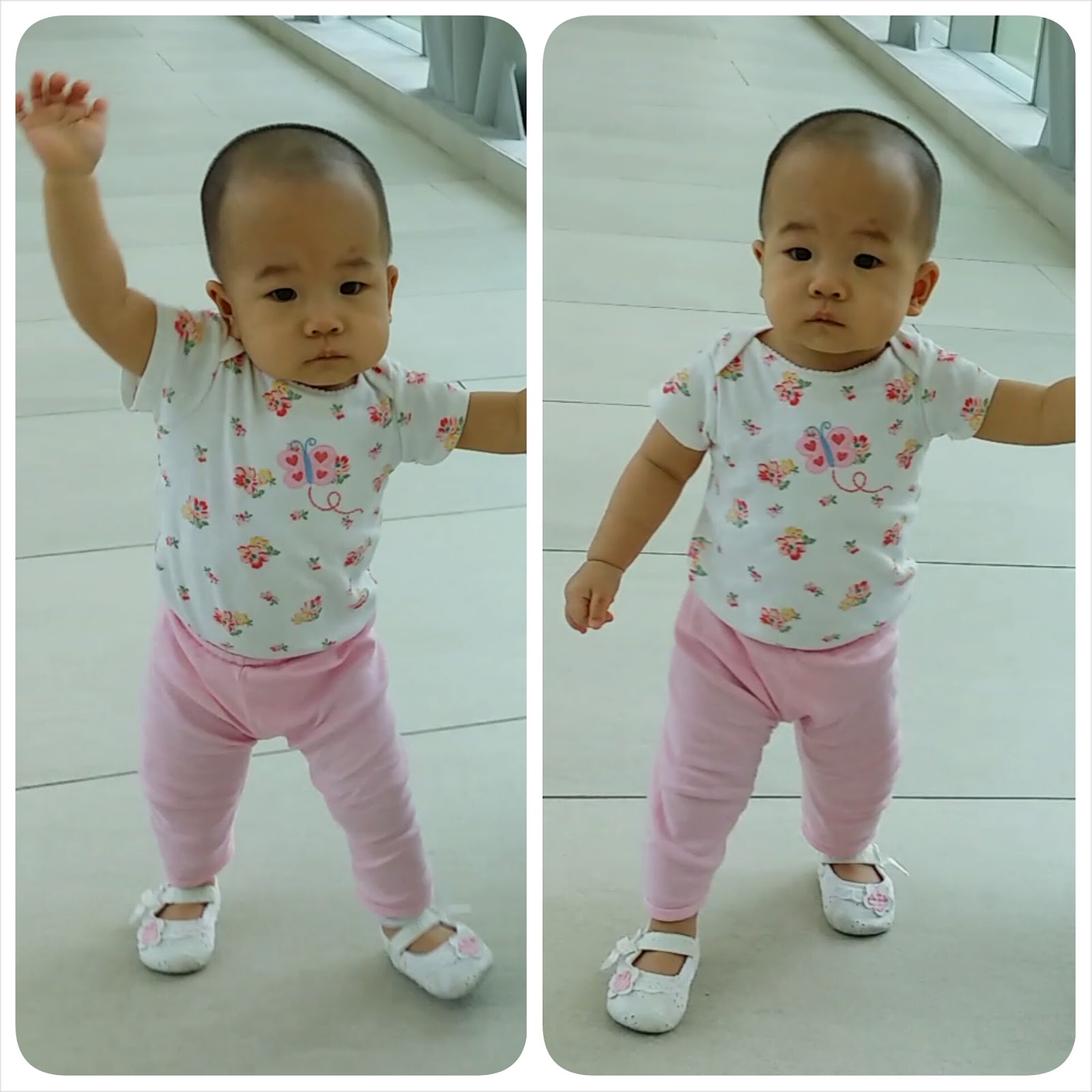 Her skin peeled on Friday and she started shedding her first coat of snake skin. Hah. It's probably natural instinct, Emma began picking on the peeled skin. It was impressive to see her having so good control over her fingers. 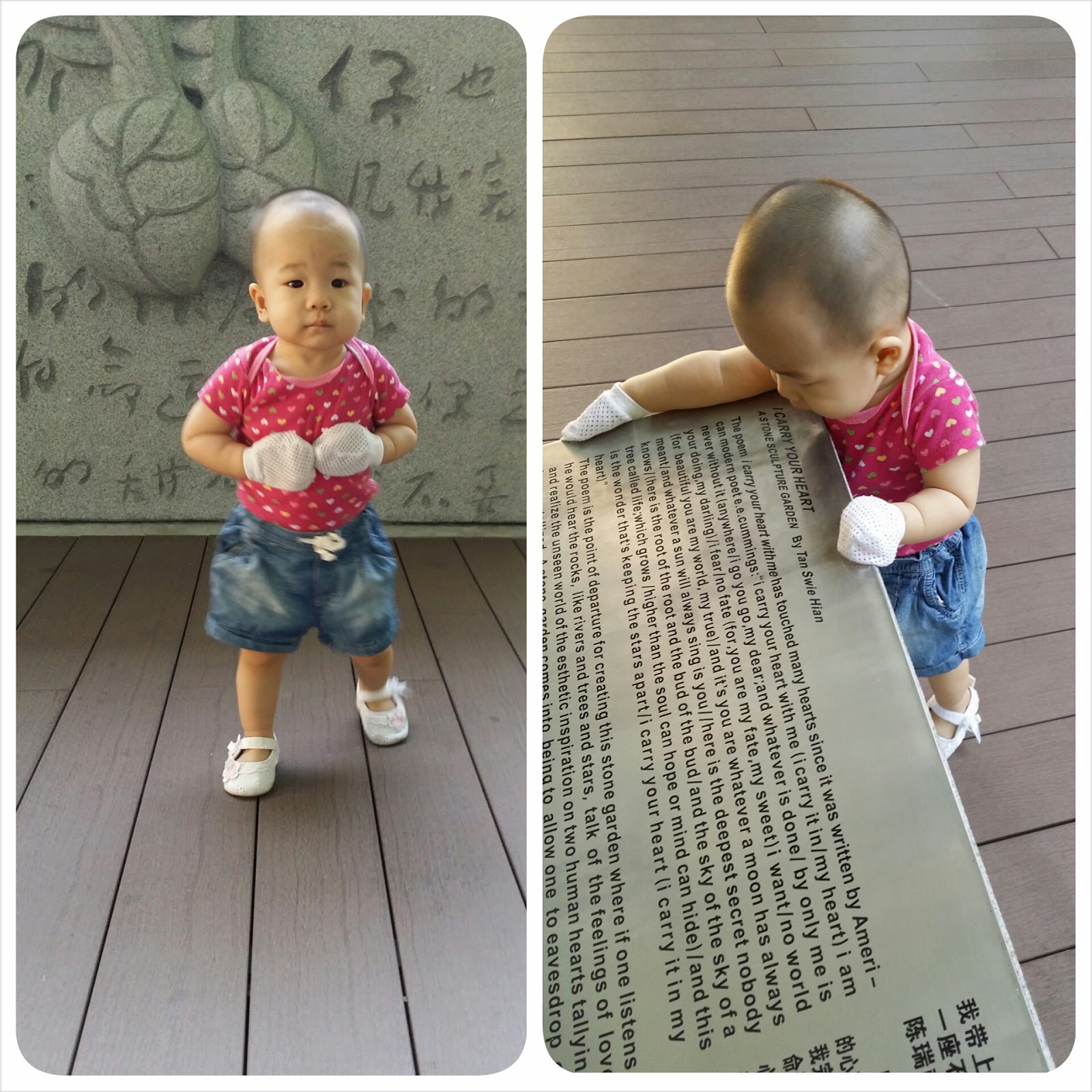 We went back for review on Mon and her thumb is certainly much better and is recovering well. Dr prescribed antiseptic ointment to apply for another few days and we gotten another tube as backup for other open wounds. He also advised not to prick if such happens again as it would expose the wound to more infection. It was our 2nd time seeing the pd and I think it's probably time to search for another.

It took a week for her to recover from the cellulitis & abscess and we are so thankful that things go well. 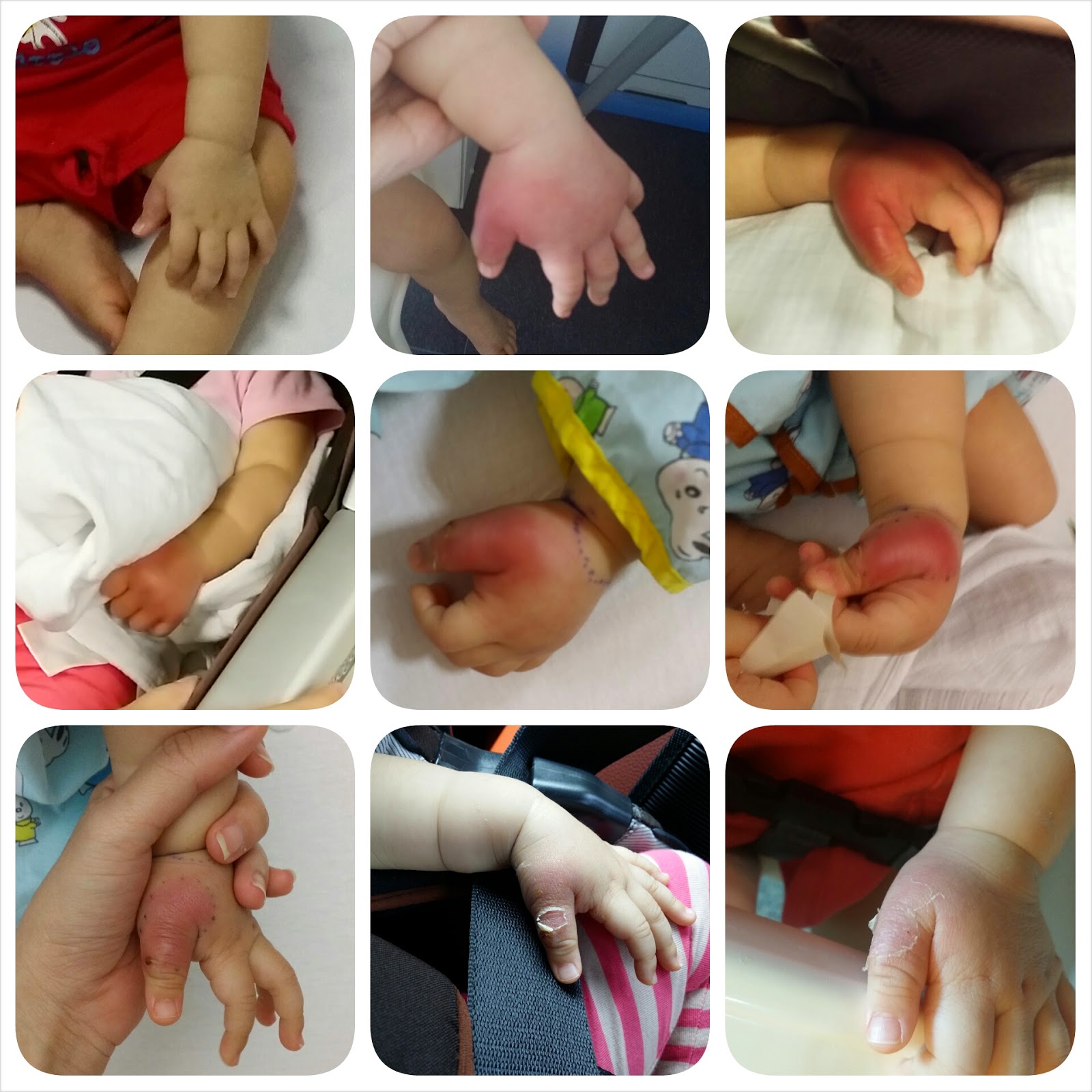 The doctors and nurses were great. We are also happy to hear (once is more than enough) that she is one of the best baby patient around. Other than the insertion of the iv plug, Emma was all good. She drinks, play and sleep fine. We are very thankful that the antibiotics work well for her. She had some fun playing with the balloon bear that colleague had gave her, making fish mouths and waving to many people. I find that she has became more cheery lately. The few days were filled with so much laughters, hugs and kisses. We are proud of her as she has been really strong and calm.

Thank you Lord for healing Emma. We have once again witness love and power of God. 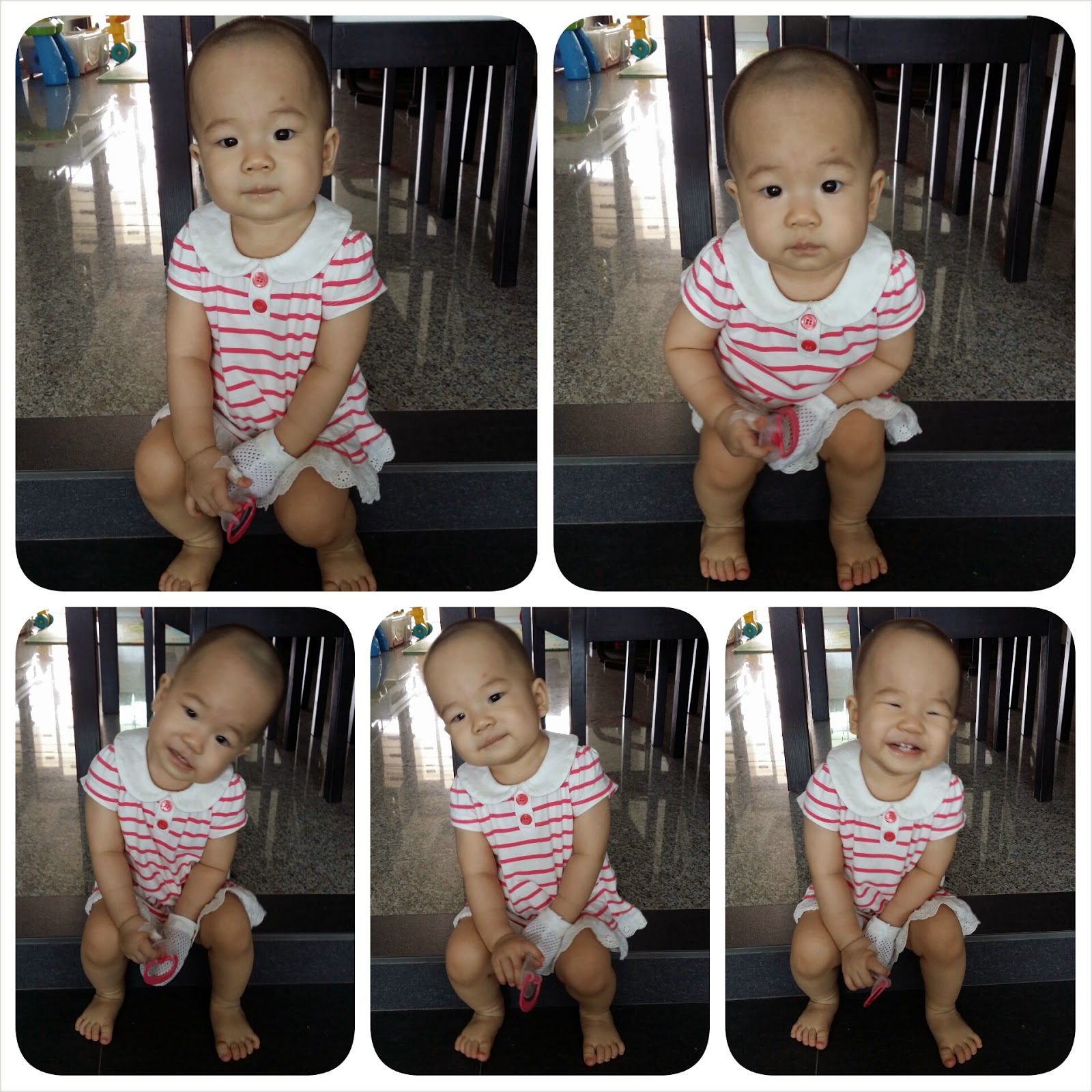 In the meantime, we are on mission to wean this little thumb addict off sucking. Mitten, bandage and pacifier. Haha.. she is totally cool about wearing her boxing gloves for hours and she has mastered skill to pick things up even with them on. However, she still can't resist to tuck in her thumb when we took the mittens off (She would walk off when we want to pull out her thumb). We are still settling her night routine as she is now unable to fall asleep without our help. These days, she would wake up once in the middle of the night or earlier than before. So much for 11 months of good nights, it's time to endure some interrupted sleep and break her habit. We pray for strength, patience and perseverance.

All the best to us!!