Avalyn started infant care just 1 day before she turned 3 months. Many said it will be easier the 2nd round, but it wasn't the case for me. I find it harder to leave Avalyn in infant care than Emmalyn. Perhaps, it's because Avalyn is a fiercer and louder crier. Her voice turned hoarse after spending her first day at infant care. It broke my heart to watch her cried. 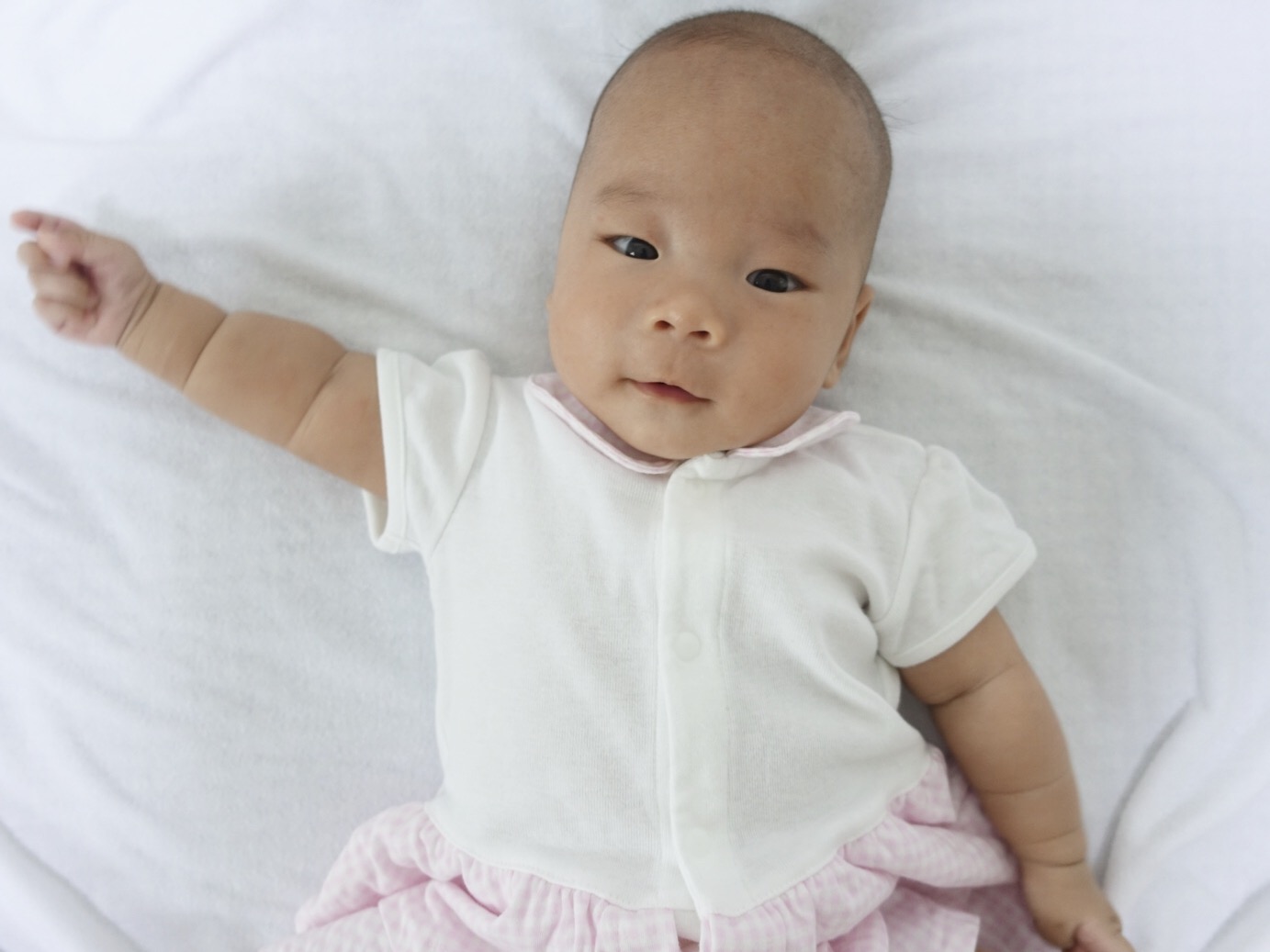 But, my mind got stronger than my heart over time and I know that she needed to get used to it. Unlike the first time, I teared as I couldn't bear to leave Emmalyn and don't know if she will be well taken care of. This time, I know she will be well taken care of as she is taken care by the same teachers that took care of Emmalyn. I knew she cried as she was tired and hungry, and not because of separation anxiety. Nevertheless, I still stayed around for 3 mornings. I only stayed around for 1hr plus once for Emma as Hubby thought my separation anxiety was too much for me to bear. 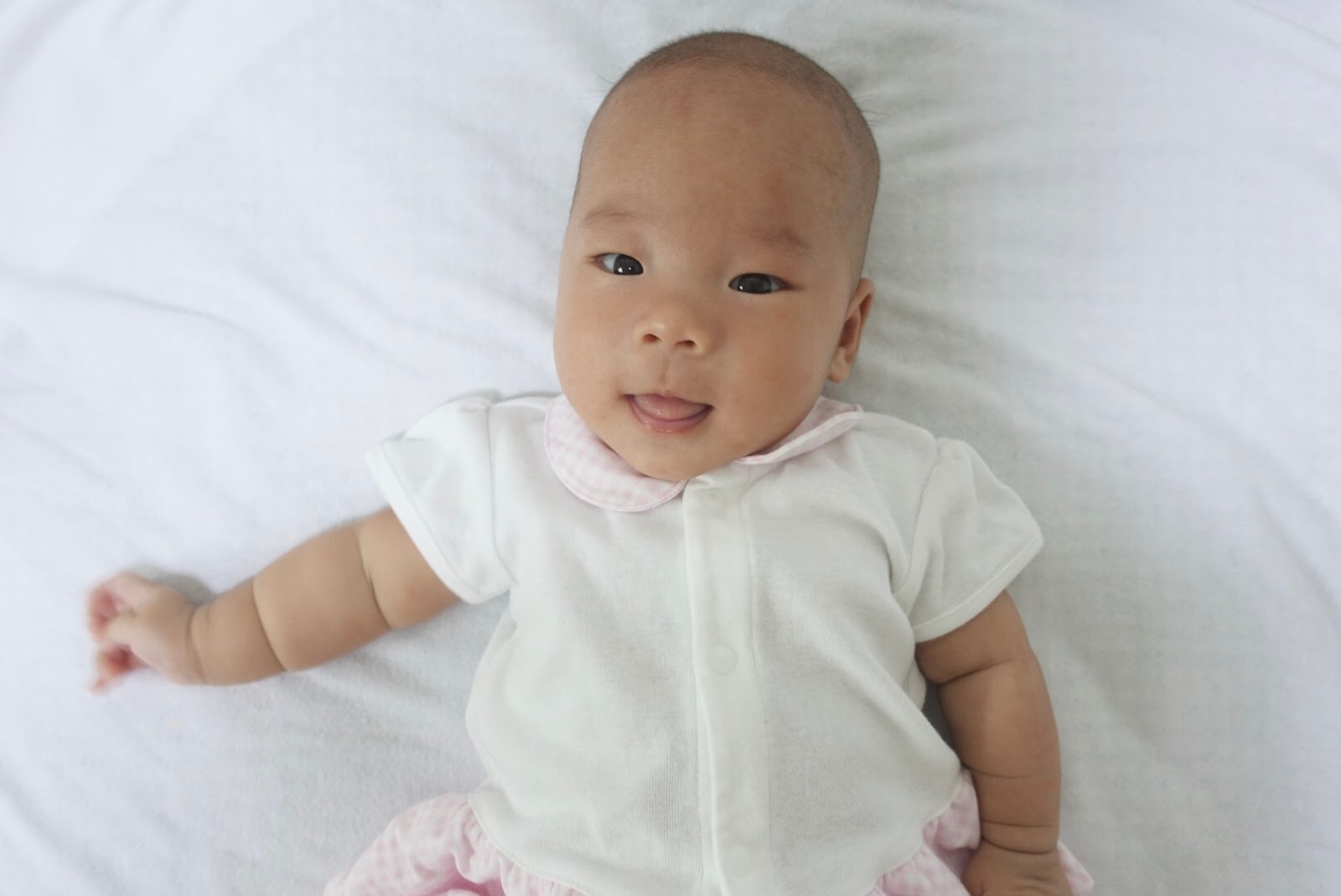 So far, she finished up all her milk and napped well. But, she cried quite a lot in the past few morning when it was usually busiest at that time. She loves to sleep and still naps in the morning but she had to wait to be bathed. So, when she can't nap, she declared war. She wasn't used to the noisy environment, there was no pacifier and no carrying around for long period at school. The babies needed to take turns for bath and sometimes they had to need to wait a little.

It's still too early to say if Avalyn would settle down well. We just transited her from 80ml on 2hrly feed to 120ml on 3hrly feed on Monday and she did great. With this, she won't be that hungry by the time she arrived at school and the wait for bath might be more bearable. We shall see how things go along the way and keep praying that she can adjust fast. 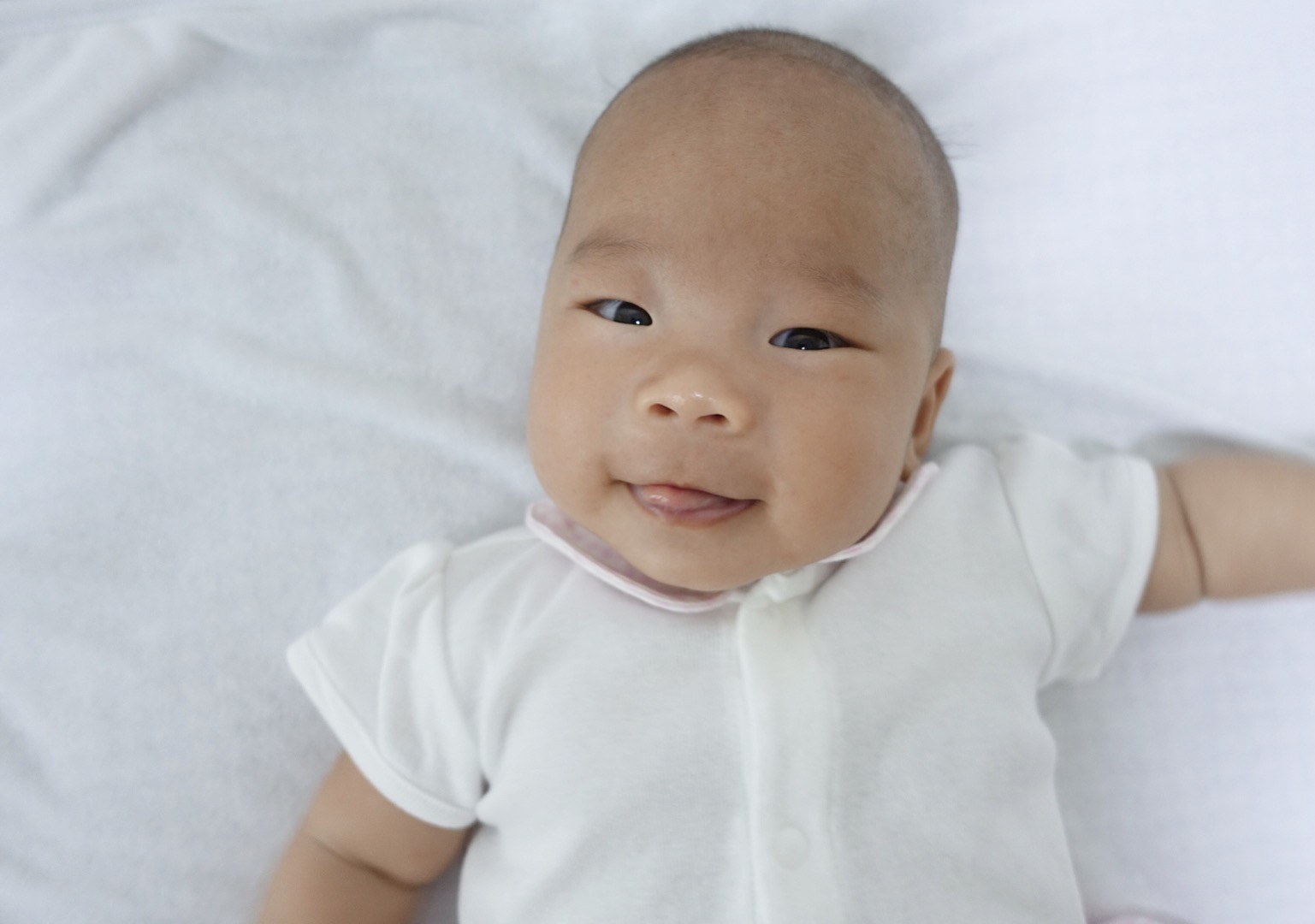 Her day usually starts around 7am with a loud "Good morning, mei mei!!" from Emmalyn and she sleeps after her 8.30pm feed. She would sleep till 2-3am with a dream feed at 10-11pm followed by another feed at 5am. Night feeds are still quite manageable as she drinks fast and sleeps right after the feed. But, now that I'm going back to work, I hope she can drop her night feeds soon!
Since the school does not swaddle babies, we stopped swaddling her recently to let her get used to sleeping without swaddle. We also just stopped mittens and booties for her.

She's a sleepyhead and spends most of her short awake time drinking milk, changing diapers, bath and lying on activity mat. She's smiley and getting very chatty. Her neck is still not strong and she could only lift up her head with a pillow under he but not on flat ground. We need to give her more tummy time to train her neck! 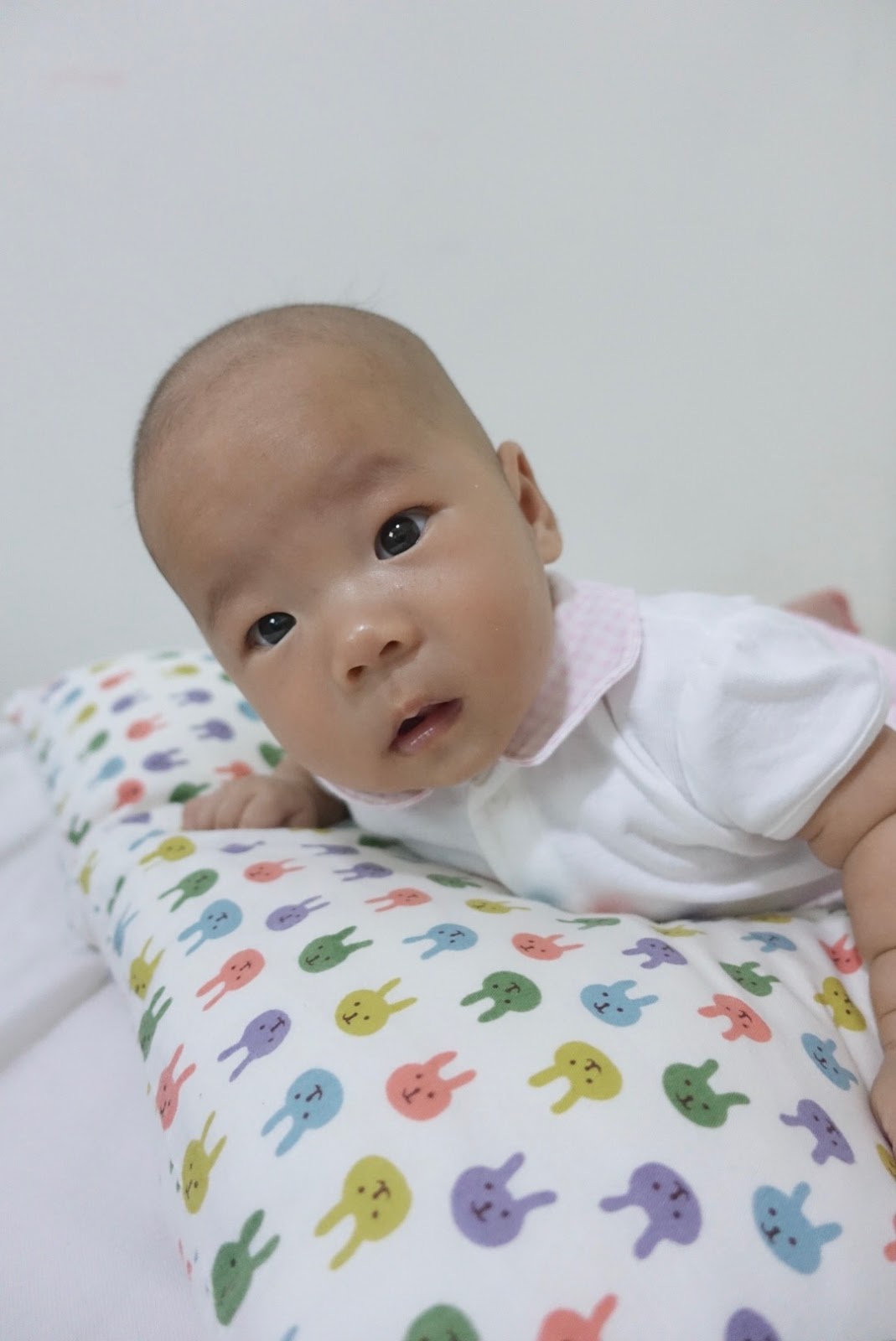 At 2.5 months, Avalyn had her first oversea to Koh Samui! She did well on the short flights and apart from her evening fuss, we were coping fine. She was just a little tanned after the trip. Last month, I also brought her and Emma to Jurong Bird Park alone. In addition, she sat through her first play - Little Red Riding Hood. 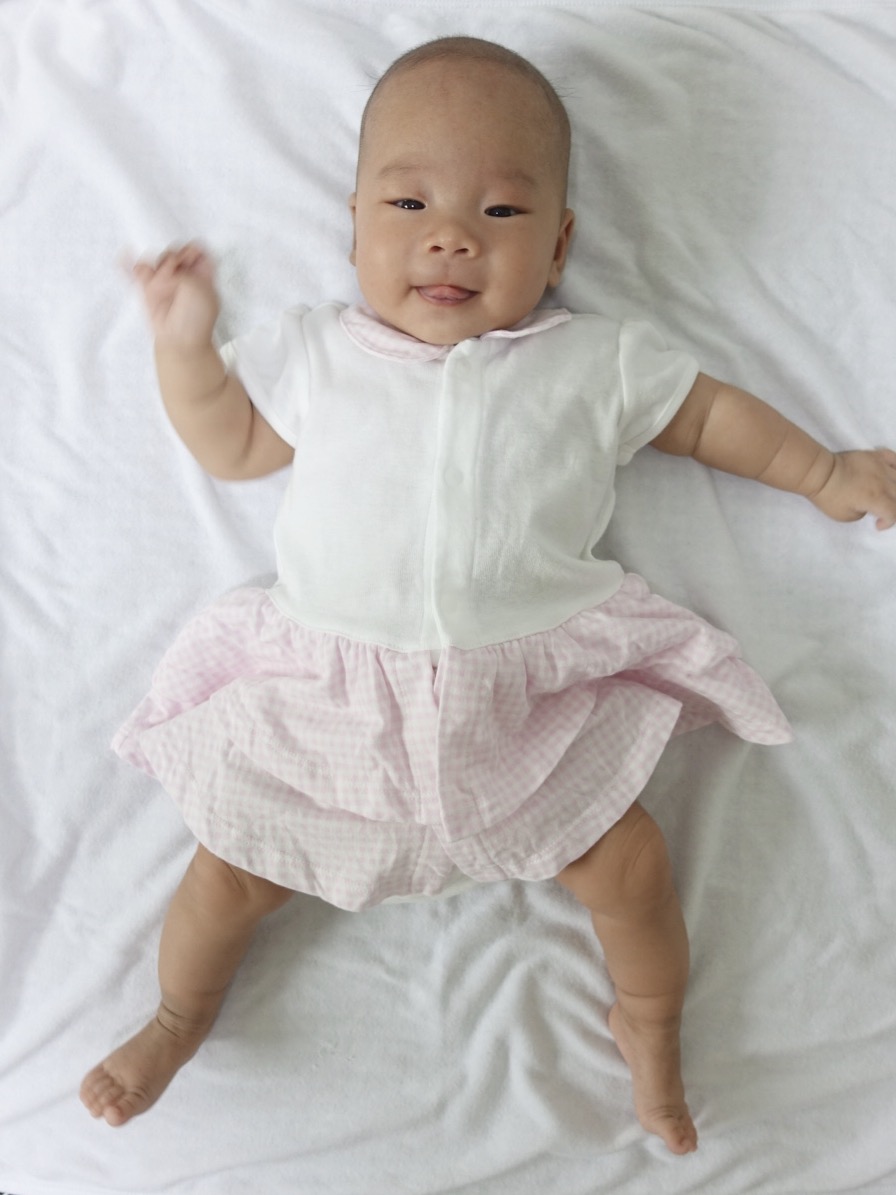 Following a fun 3rd month, we are going through lots of adjustment with the infant care, me returning to work and house move (hopefully!). All the best to us! 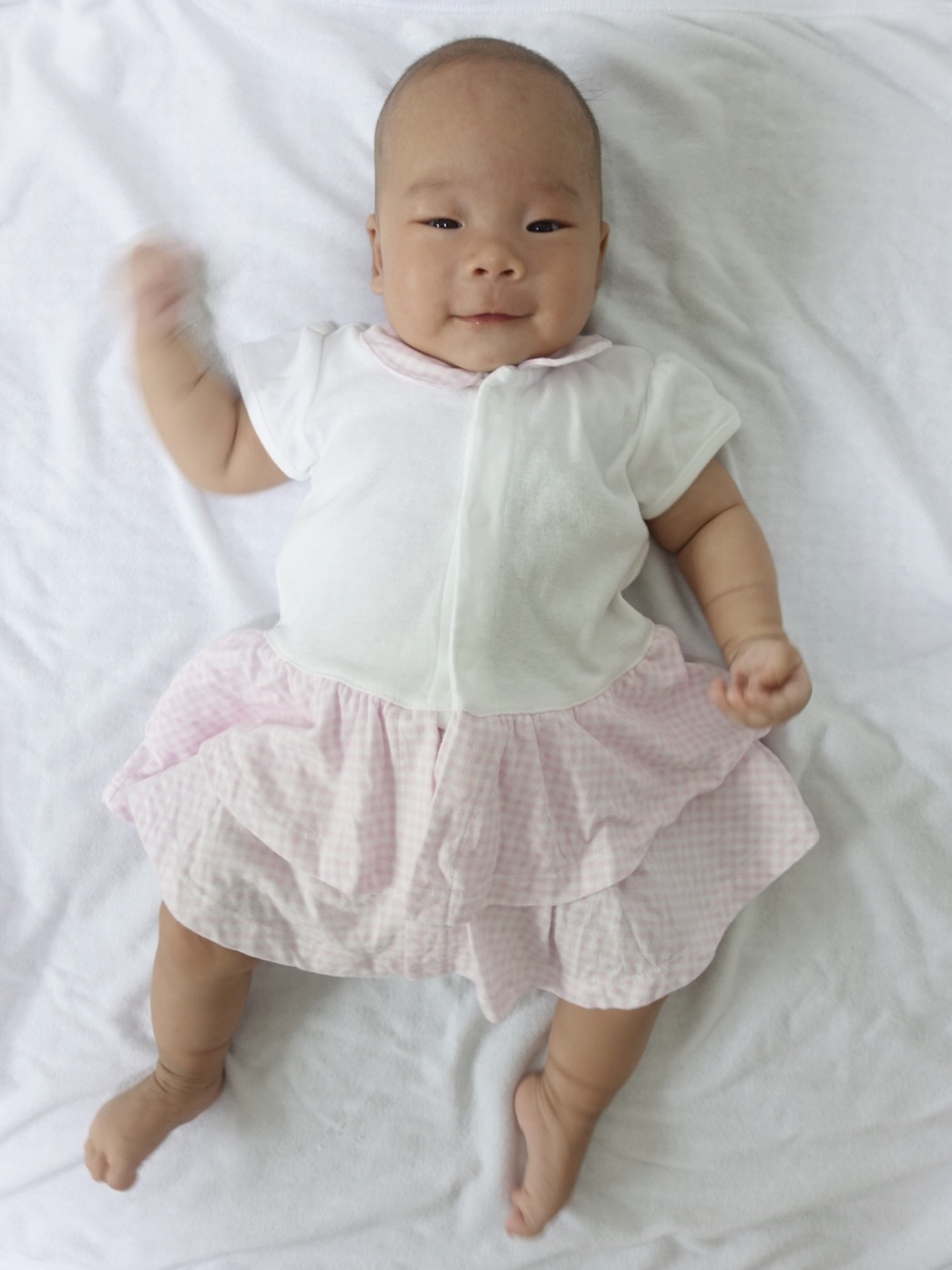