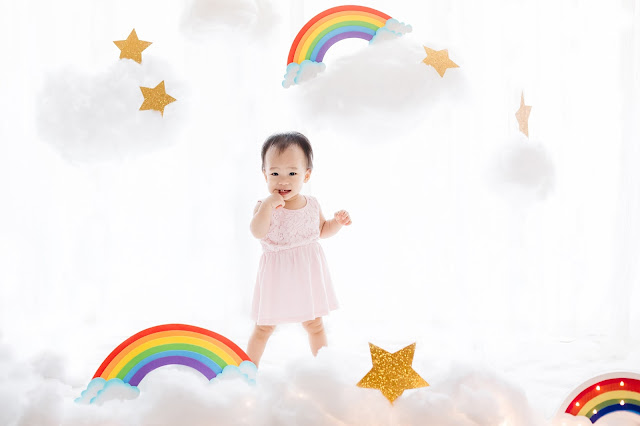 And, yay! We pull through a year with our 2 children! I wouldn't say that Avalyn is a difficult baby but she isn't the easiest one either.


She cries a lot, a long time and very loud. Many times especially in the car or when we are getting ready to go out, her cries drive us to the wall. But, she should count herself blessed to have a big sister who is patient towards her cries. Emmalyn hardly ever scold her for being so noisy. I'm so thankful for that. When she was younger, she "competes" cries with her classmate (another loud crier). Both of them could almost cry the whole school down.

Avalyn's a very expressive and playful baby. She laughs and smiles as much as she cries. She has certainly brought us so much joy. It usually don't take much of an effort to make her laugh. Emmalyn loves to make her laugh silly.

She plays a lot and loves exploring. Now that she's standing and cruising, she's going places to check things out. Her current favourite toy is the wooden kitchen - she would stand there, cook and open/close the kitchen doors for quite a long while. She also enjoys hanging out with her sister. She started to walk a few steps with us holding her hands!

She's quite a chatter and already baby talking a lot with Da da, mum mum, ah, wo wo. We are all waiting for the day she calls us! Wonder who would she call first. She lifts up her arms, loves clapping, pointing and playing with her hands. Her fine motor skills are great. She picks small particles like rice grain, thread easily and put them in her mouth. Thus, whenever she seems munching, I would always check out her mouth.

At 1 year old, She's 8.2 kg and 66 cm. She has 4 teeth. She now drinks 4 times of milk, 2 porridge feed (lunch and dinner), breakfast snack and afternoon snack. She's quite a foodie and always aiming at our food. It has been almost 6 months since she started semi solid and has tried a quite decent list of food - carrot, potato, sweet potato, pumpkin, broccoli, cauliflower, tofu, bean curd, fish, pork, white anchovies, apple, papaya, cereal, bread, rice, porridge, baby biscuit. Now that she has turned 1, I hope to introduce items like egg and chicken. She has been on full breast milk since Day 2 and tried a bottle of formula milk a day for this few days

Avalyn's cot mattress was slightly smaller than her cot so she was often stuck in between the gaps and woke up after she learnt how to flip. But she fell asleep quickly on our bed. When we finally got the right mattress and wanted to lower the cot, one of the screw broke. Her cot is now fixed but we haven't tried putting her back. Oh, maybe we should try some time soon!

Unlike at school, Avalyn naps much lesser on weekends. We don't stick to nap routine as we are often on the go. So, she naps in the carrier when we are out.

Having a baby didn't keep us at home. Our family heads out on weekends together alot. We also brought Avalyn on overseas trips to Koh Samui, JB and Bangkok. Avalyn dislikes pram and I always bring her out in the carrier. Since I know that I'm going to miss this babyhood, I'm just enjoying the closeness all I can. I'm glad that Daddy's also enjoying babywearing her!

Of everything, we are most thankful that Avalyn's healthy and has pretty strong immunity. I like to credit it to breastmilk and Emmalyn who loves to plant kisses and hugs Avalyn since she was a baby - so much love and so much germs too. Avalyn probably got to build up her immunity at a faster speed. Thankful that she only had a few visit to the doctors.

Things were pretty overwhelming after I returned back to work. I had a hard time juggling work, family and blogging that I didn't manage to catch up on Avalyn's updates. So now, let's look back at how much she has grown over the year! 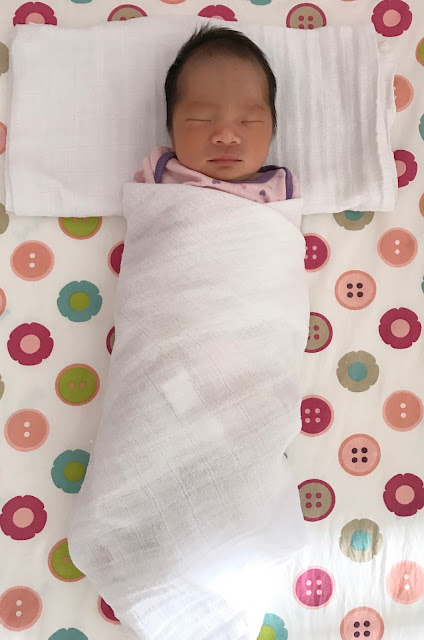 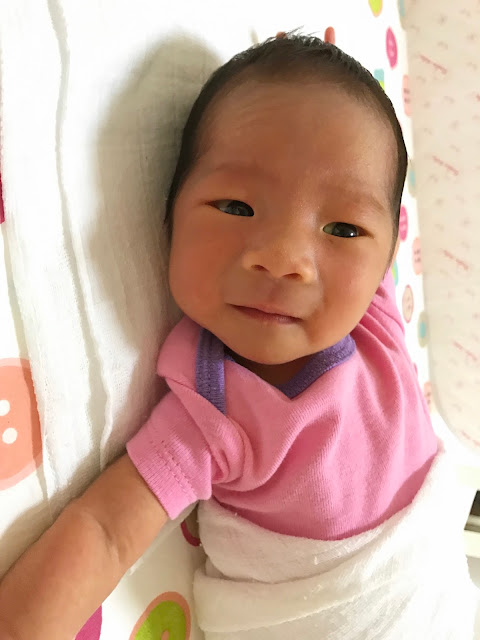 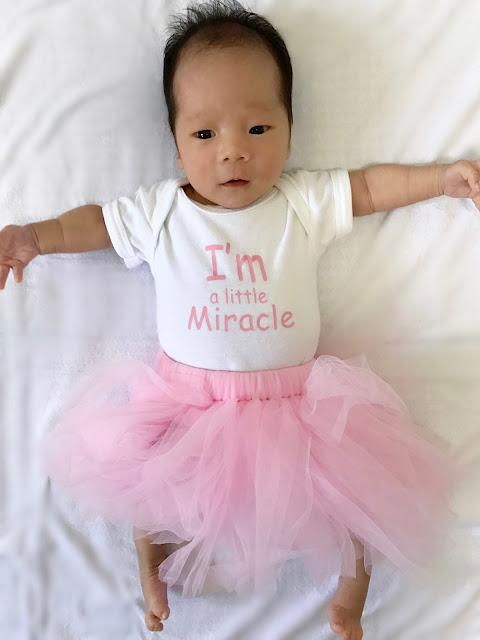 She doesn't drink much on latching so that's kick start my pumping journey. 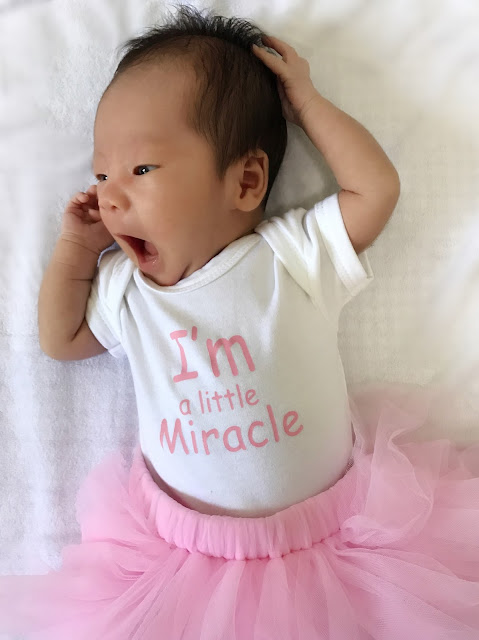 Shaved head made her head looks so round! 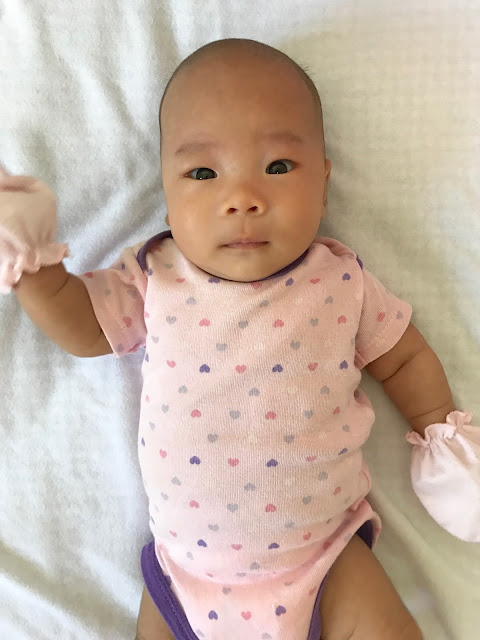 Avalyn had her first overseas trip to Koh Samui at 2.5 months! 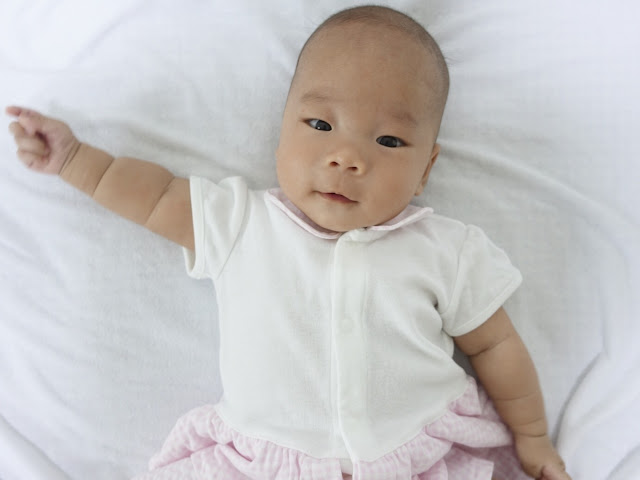 She joined the infant care centre 1 day before turning 3 month old. It was such an emotional start but everything is well so far! 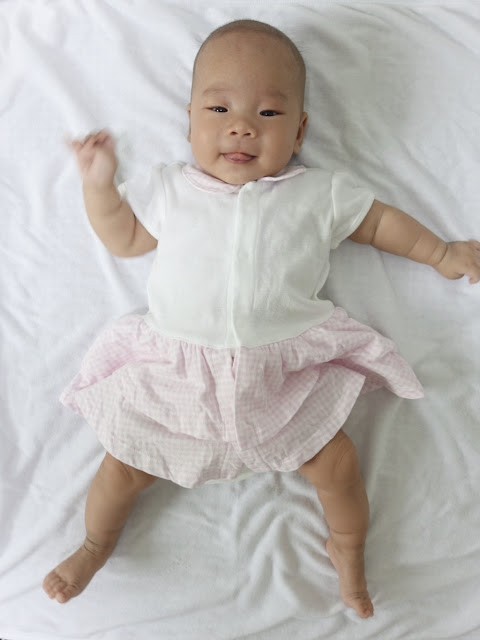 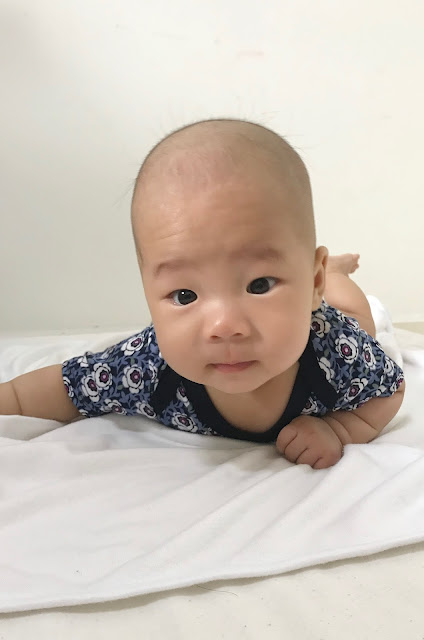 Getting really expressive and smiley! 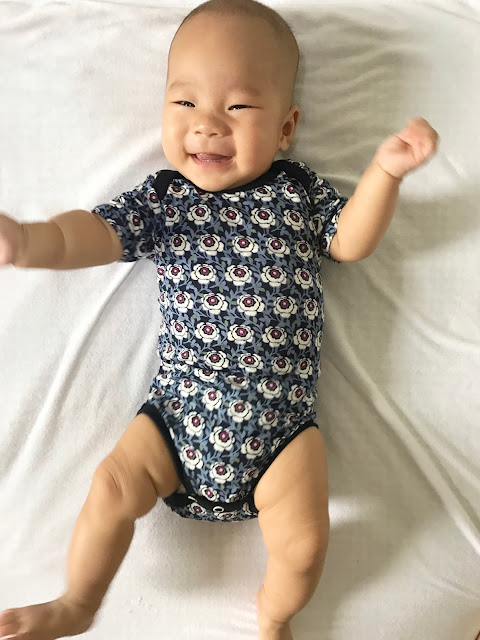 Enjoying the house while Daddy and I packed non-stop. 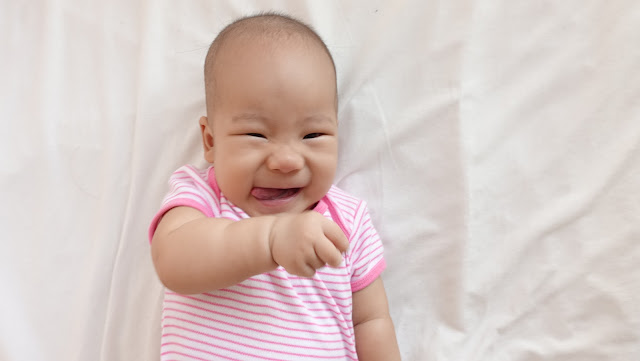 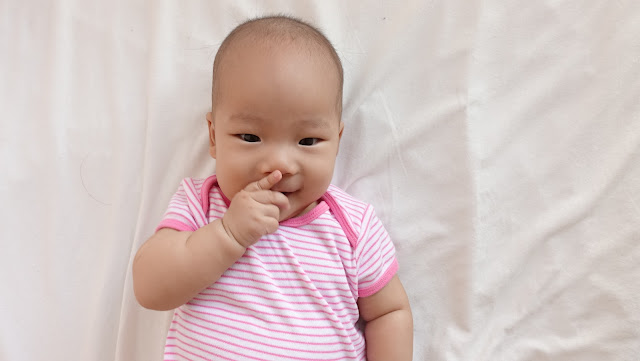 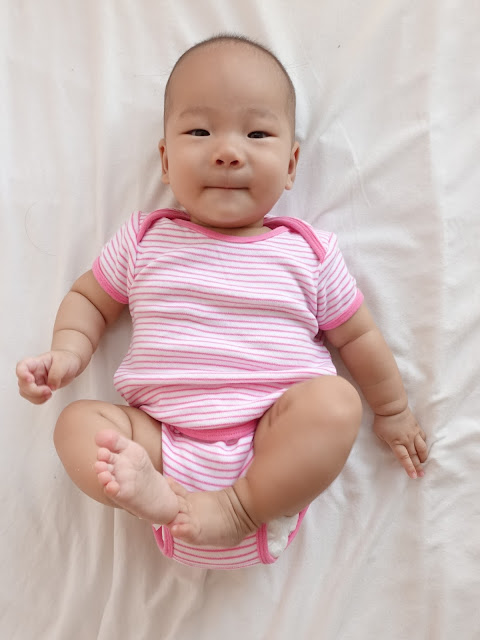 So much milestone this month. She flipped by herself and started cereal at 5 months 3 weeks old. 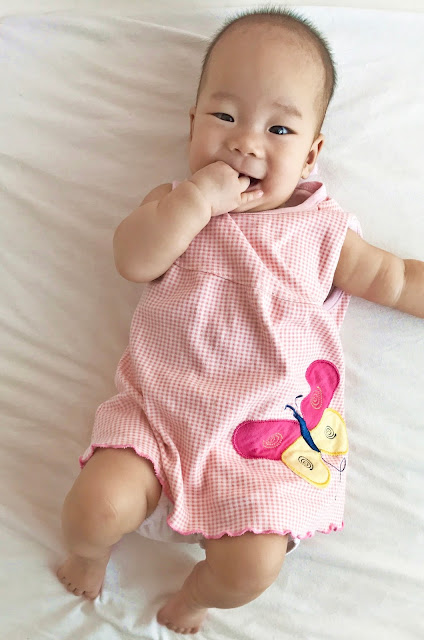 Her journey of sleeping through began. 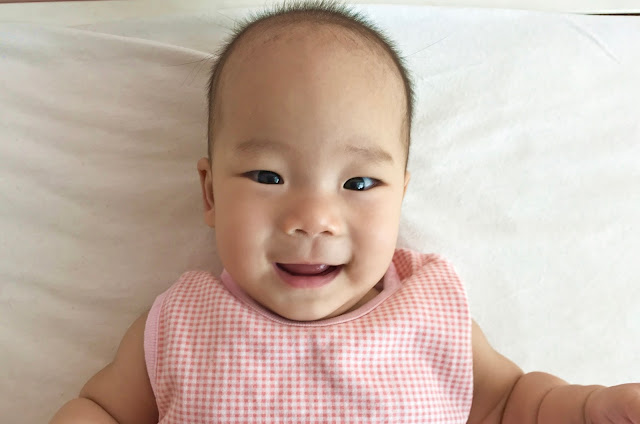 She had her 2nd trip to Church retreat at JB! 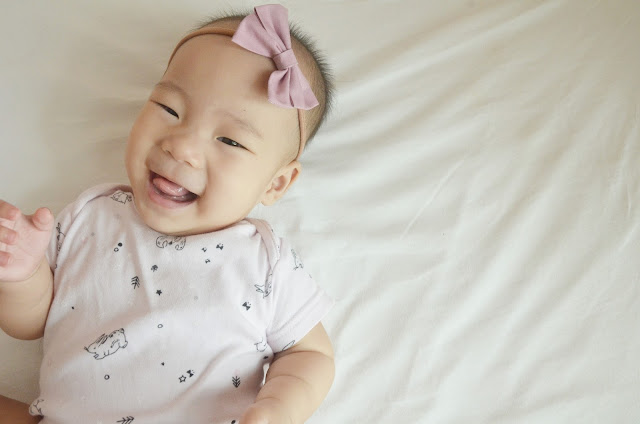 Had her first tooth! 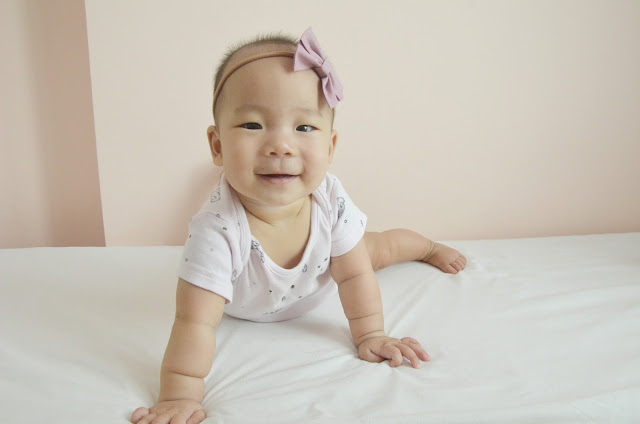 Loving her tummy time! She learnt to sit up without support, sit up by herself and then started leopard crawling! 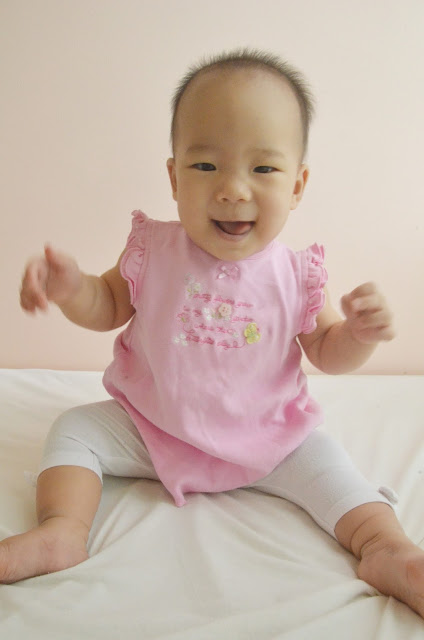 Avalyn was baptised on Christmas's eve! 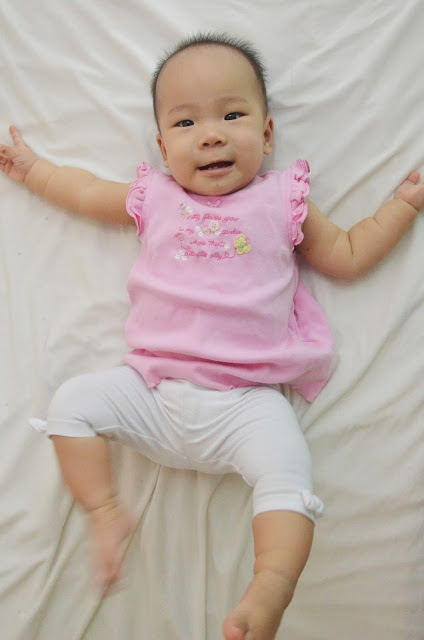 Avalyn started standing up with support! 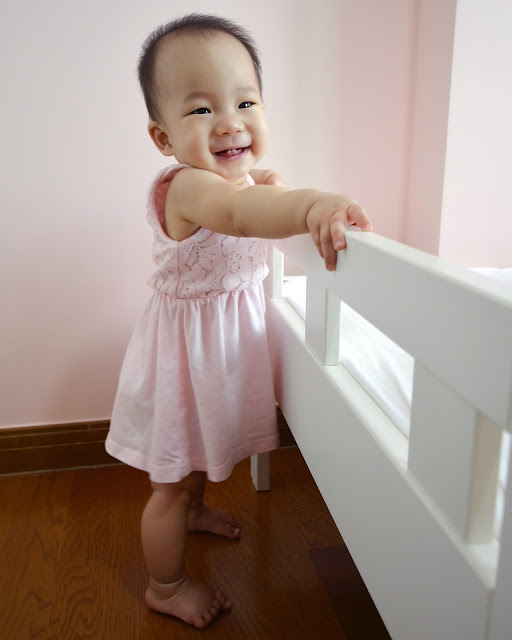 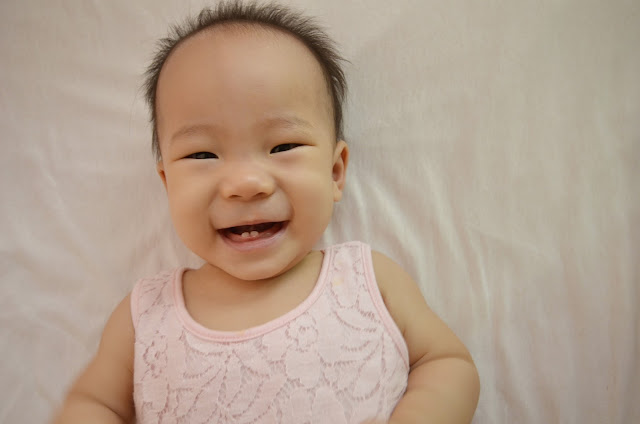 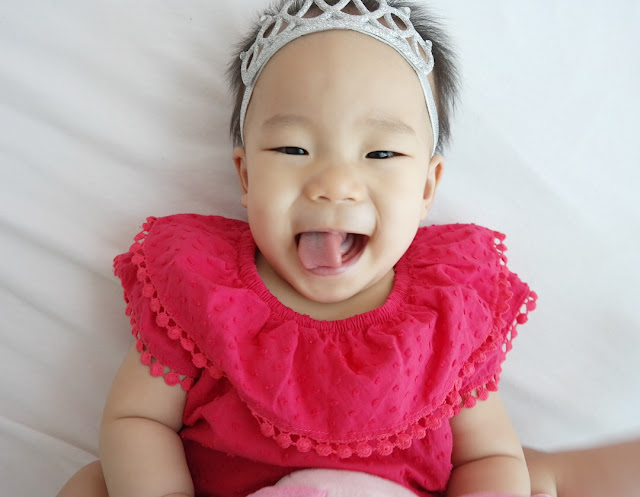 She learnt to pull herself up, sit down steadily, crawls on fours then finally cruises abit. 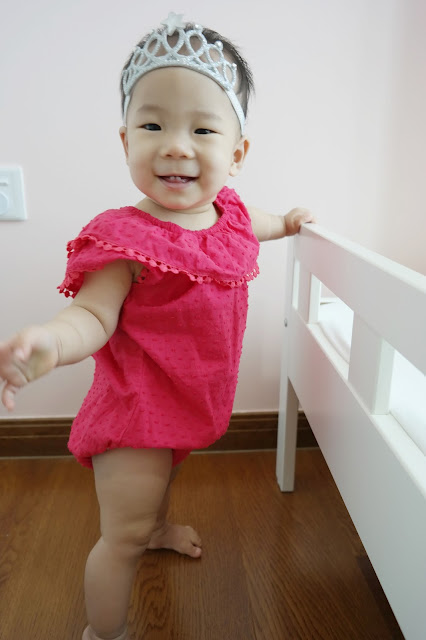 More real play time with big sister Emmalyn. Both of them loves water play in bathtub! 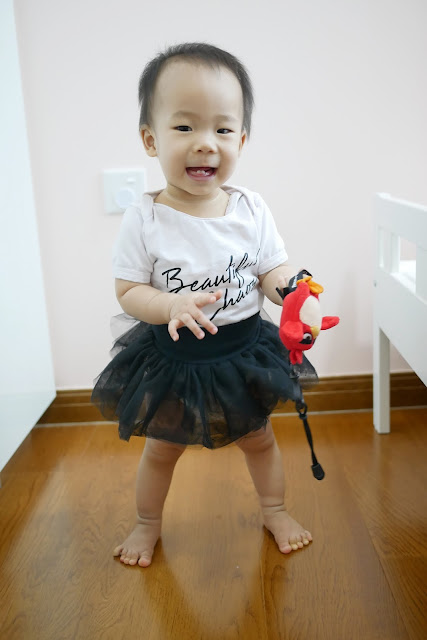 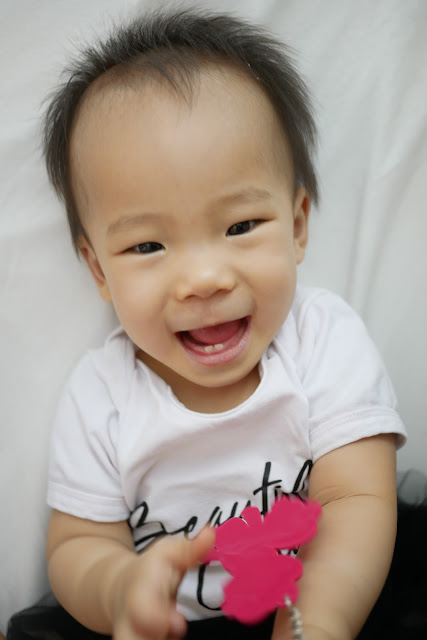 At 11 months old, Avalyn learnt to stand without support then started to walk with support like rides and on handheld. She also had her third trip and it's to Bangkok this time.

Finally, we had an eventful birthday celebration for Avalyn the weekends before her birthday, just like how she arrived. 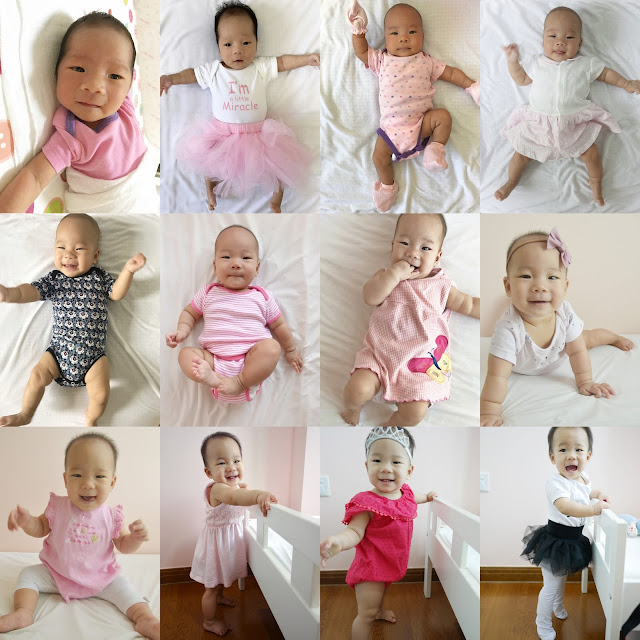 The past 12 months flew by incredibly fast and Avalyn's on her way to toddlerhood. We thank God for watching after her. While we are excited to get her going, I know I'll miss her babyness. I pray that Avalyn would continue to be healthy and happy. May we have more strength and wisdom to upbring and nurture the sisters. I can't wait to share more precious memories with the little ones and hubby of course!