Indeed, time past really fast when you have a baby! Emma has grown and developed so much over the past 2 months. 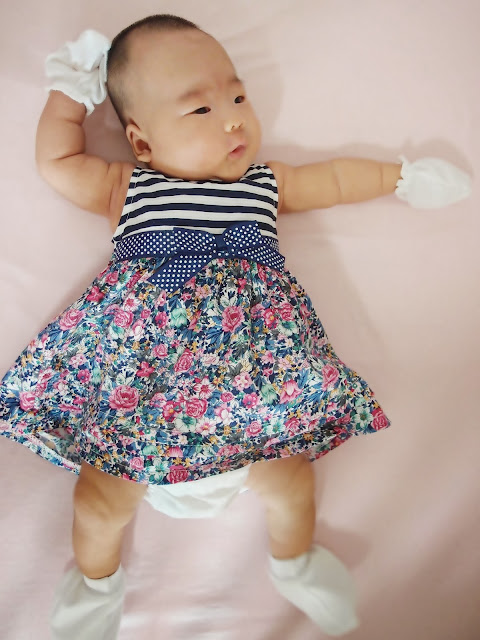 Statistics: Emma weighs 2.74kg and 47cm at birth and she is now around 5kg and 52cm (19 Sept)! Her face gets chubbier week by week and she is also getting fats rolls at her arms and thighs. Am thankful that she is gaining weight well :) From newborn size to small size Huggies diapers, we have sized up to medium size. So true about mummy's arms! As she as heavier each day, I could feel my arms getting stronger. 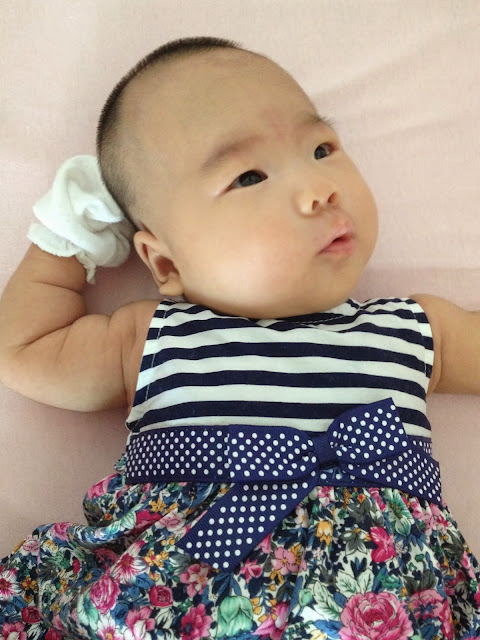 Health: She is doing great now!

During her the first 2 weeks, she went for a couple of jaundice checks as her reading was high initially. Even though she didn't have jaundice, she still needed to return for review till her reading decreases. Her readings kept increasing for about 10 days and eventually started to drop as her body began to get rid of the bilirubin through urination.

She had blocked tear duct at the left eye at Week 1, but recovered in a week or so after some days of light massage. Her umbilical dropped off on Day 6. I was changing her diaper and it suddenly came off with a tinge of blood. I had the first shock of motherhood as I thought I injured her. But confinement lady assured me that it is normal.

She had her BCG and Hep B first dose vaccination at birth. At around 5 weeks old, she had her Hep B second dose vaccination. She cried so loudly after the jab but managed to calm down very quickly with the comfort of Daddy.

At around 6 weeks, I started to notice some dry skin on her eyesbrows and shortly later I suspected that she has cradle cap on her head too as her head smells. Indeed, we could see it right after shaving. Cradle cap is harmless and would go away after some home treatment. I started applying baby oil and rubbing it off slowly at 7 weeks. It has since cleared off quite a fair bit. 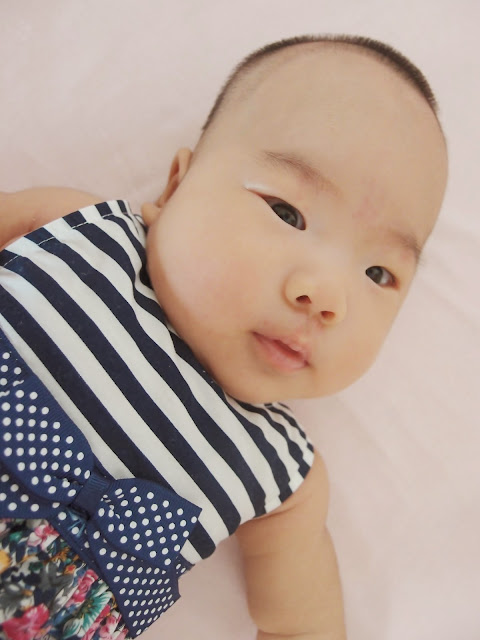 Diet: Emma feeds on total breastmilk. I am thankful that colostrum started to kick in by 2nd day and milk came in shortly. She started off with feeding every 2 hours to every other hour or two during her growth spurt at the start of week 3. Thankfully, she kind of settled down after week 4. She now feeds every 2.5-3.5 hours during the day and 4-6 hours at night. She had one 7 hours apart last night!

She latches on well and drinks like a champ. She usually takes 15-30 mins for a feed. Had a couple of spits and vomited twice but she appeared normal after. Over these 2 months, she took a couple of expressed milk bottle feedings on some nights during my confinement period and when I was away. She can drink up to 100ml per bottle feeding. 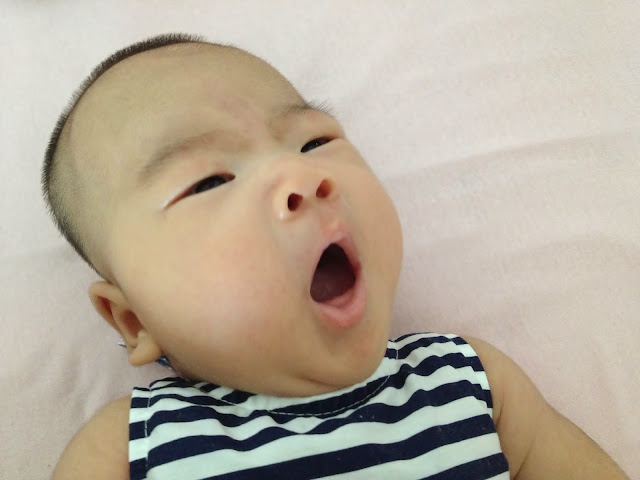 Sleep: For the first few weeks, she either sleeps after feed or be fussy till the next feed. To our surprise, she suddenly sleeps so much better after her 1st month. She probably knows that there is no confinement auntie and wants to spare us the sleepless nights. She started to sleep longer hours like 4-6 hours at night as compared to staying awake and needing to be carried for a couple of hours at night.

As of now, she usually sleep well for morning/afternoon naps. As for the late evening ones, she would sometimes stay awake till she sleep at around 9ish before her 4-6 hours of sleep. She would then wake up once or some nights twice for another feed. Last night was a gift, she slept from 7pm to 5am this morning with a dreamfeed at 10pm (she was still sleeping while feeding!). Hence, I am still having "enough" sleep to pull through these days :) 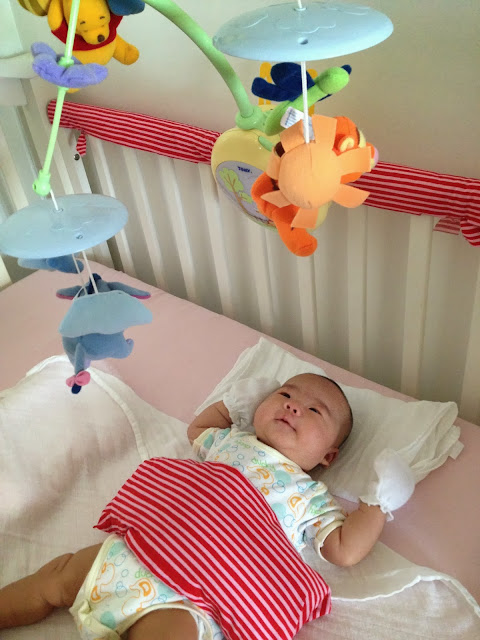 Activity: Emma is a sleepyhead, I could hardly get her to stay awake without fussing during the first month. The only time that she is awake for a longer period of time was bath time. However, things started to changed as she past her first month.  She started to be more alert and able to stay awake longer. We played songs from the "Praise baby collection" albums. She couldn't really play but I would put her down at her playmat, lay her down at the sofa/bouncer for fan watching, watch her mobile, interact with Shiro, sing songs, read stories to her and take plenty photos of her. I try to keep her awake for sometime after each daytime/afternoon feed before putting her back to nap. It is supposed to help her learn to be independent of nursing to sleep and able to sleep on her own. At week 4, we tried to give her pacifier but she rejected it.

So far she seems to enjoy bathing time while I sing her songs and entertain her. She is almost outgrowing from her bathtub. She usually doesn't fuss much at nappy changing other than when she is hungry for milk. I guess she loves fresh nappies. 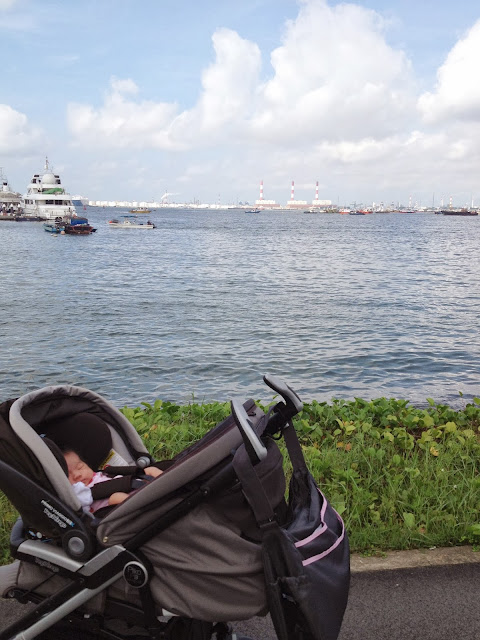 Social/Outings: Her first few "outings" are to the polyclinics during the first 2 weeks. We started to bring her out for a short period after my confinement. We began with parents-in-law's place, church, clementi mall, Hubby's grandmother's place, west coast plaza, west coast park and KKH. We usually go out in pram/carrier on foot and pram when driving. At week 7+, I had my first attempt and successfully brought her out in carrier alone.

We try to get back home before her next feed so that I don't need to breastfeed outside. For those longer hours like at church, I would need to nurse her outside. I am needing more practice to nurse outside with nursing cover and without nursing pillow so that we could stay out longer. I recently bought a new nursing cover that is more user-friendly. :) Hoping to master it soon!

During the first month, we have visits by relatives. Thereafter, Emma also have her interaction with many wonderful people, who have blessed her with many gifts, on her first month celebration. Followed with visits by CHAOS mummies as they weren't available on her celebration. Parents have also been dropping by weekly while we get the hang of the getting-out-of-home logistics. We are finally planning to visit them at their place next week! 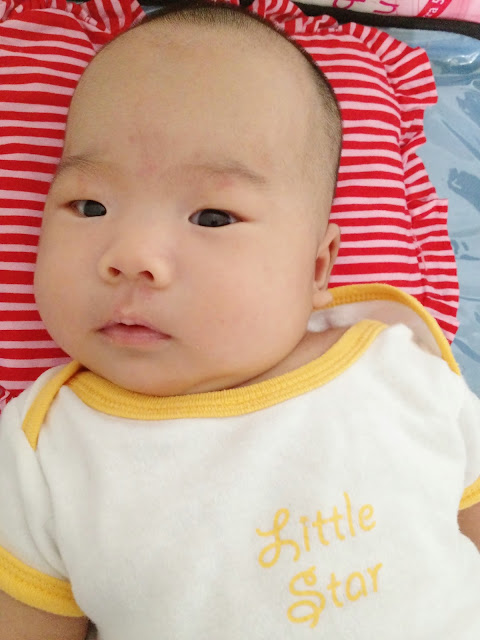 Clothes: We have been blessed with many handdowns/gifts. Our niece is 8 months older than Emma, and sister-in-law has kindly passed down her clothes. Besides, I have also gotten few bags from a couple of friends. Hubby had to restrain me from buying any clothes for her during pregnancy and I only managed to buy one pack of rompers after much pleading. 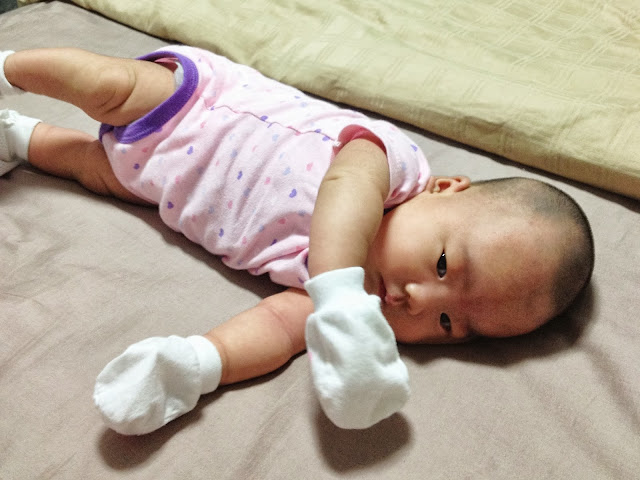 Milestones: Emma had her first haircut before turning 7 weeks old!

She is getting more alert. She could follow some movements and observe faces. She has started to smile more since week 6. She has been making lots of funny noise (There was once we heard hao er - so hungry, lol). I think her hearing has improved as she would sometimes wake up from her nap when Shiro barked suddenly as compared to before. She moves her hands and kicks alot. She even managed to rotate from vertical to horizontal position at sleep. She seems to be trying to flip, can't wait for her to do a flip in the next few months. She is able to hold he neck for very brief moment when we carry her or in bathtub. 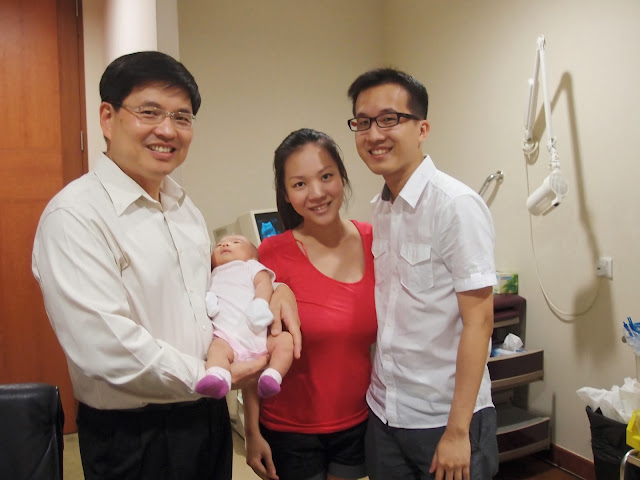 Postpartum: I'm feeling great and enjoying the motherhood. Emma has been bringing so much joy to us. Thankful for the love and support of Hubby. I gained 14kg throughout the pregnancy and had shed around 9kg. Another 2 months to lose these stubborn 5kg! I finally had my first facial after 3 months!

Went for my post natal check up after 7 weeks and am 'discharged' :) did a pap smear and am safe! I'm glad to be under such experienced and assuring gynae.

The first month was rather tiring and challenging. It was heavy on recuperating and picking up new skills. Breastfeeding, changing diapers, carrying Emma, putting her to sleep, bathing her (towards end of confinement). Moving on to the second month, things have started to settle down and becoming more manageable. I am able to care for Emma along with the household chores and have some personal time for most days (with some bad days of course!). There are still lots of prayers, patience, learning, planning and time management involved each day! Am already half way through my leaves, I'm going to treasure every precious moment!