Our family was very privileged to try out Legoland® Malaysia Resort's latest hi-tech attraction, LEGO® NINJAGO™ The Ride last weekends before its official launch on this Friday, 4 November 2016. 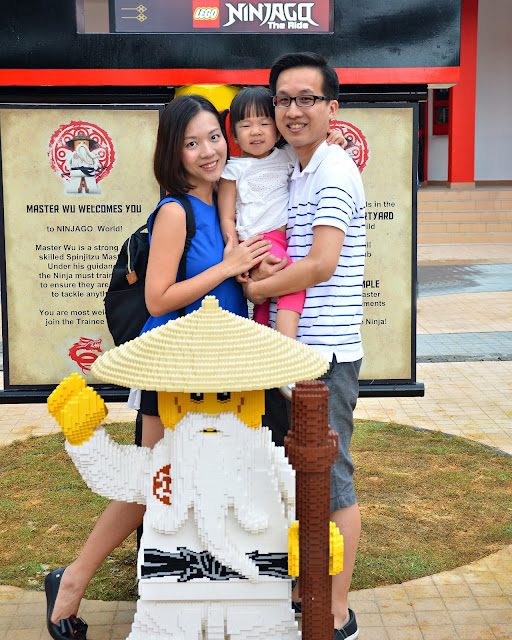 LEGO® NINJAGO™ The Ride is a fully immersive 4D dark-ride inspired by the highly popular LEGO® line of NINJAGO™ toys and TV series on Cartoon Network.

We heard about 4d shows but it was definitely our first time hearing about 4D ride. So how's the ride like? This new ride enables ninja wannabes to use our hands to throw virtual lightning bolts, move shockwaves, send ice soaring and emit fireballs to fight the enemies. During the ride, we experienced features effects such as heat, smoke and wind throughout the adventure. We then collected points for our training and battle efforts throughout the ride and scores are displayed when the quest is completed.

I'm excited to know that it's the very first of its kind ride in Asia! With a hefty investment of more than RM40 million, it's the Resort's largest additional investment since its opening. But, this is just the beginning, Legoland has lined up more additions to the Resort in the following years to ensure that every visit is a new one!!

LEGO® NINJAGO™ The Ride resides in a grand training temple at the Adventure Land. As we walked in, it felt as if we had entered into some kungfu movie scenes. 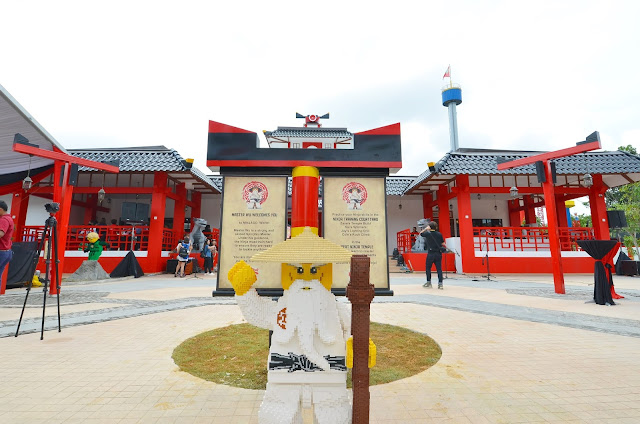 In front of the training temple lies a spacious garden where Master Wu stood right at the entrance to welcome all Ninja wannabes with his cute young ninja disciples - Kai, Jay, Cole and Zane. Ninja lovers can get to take some photos with their heroes! 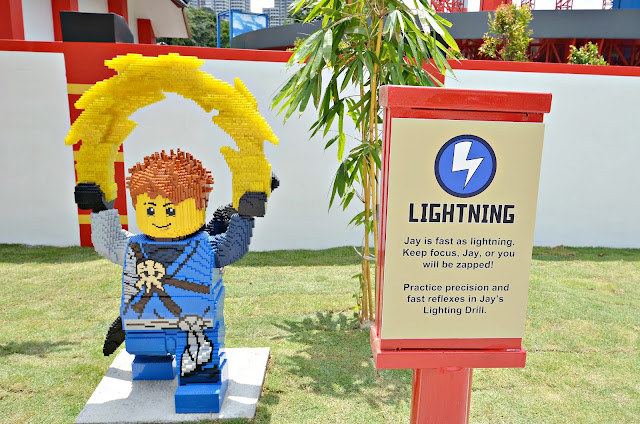 Within the LEGO® NINJAGO™ World, there are several training areas for guests to play with.

Kai's Spinners: Guests can test their balance as they stand on one of Kai's spinning platforms and twirl.

Cole's Rock Climb: Grab a hold! Kids can test their agility as they scale a rock wall.

Nya's practice: Master the water element with Nya in this 3D interactive game!

Sensei's shop: Now inspired to be a ninja, guests can purchase a gift or souvenir when they exit LEGO® NINJAGO™ The Ride in Sensei's shop. 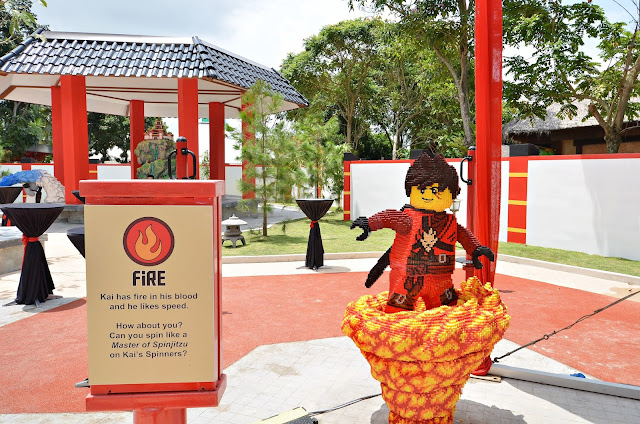 
We entered the dimly-lit and mysterious training temple but were quickly distracted by the countless displays as we walked to the ride. 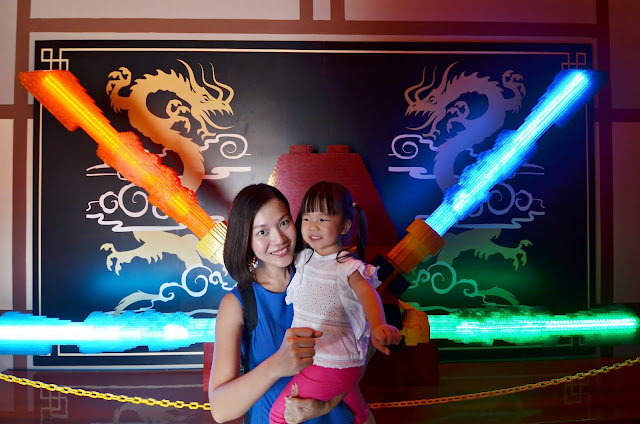 And most importantly, it's air-conditioned! What a treat after being in the sun for a while. 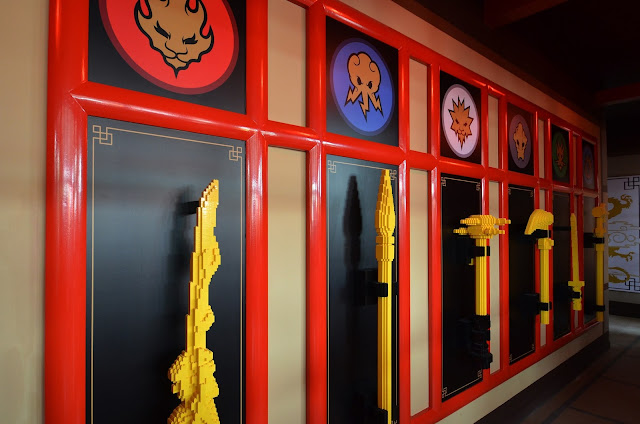 There wasn't a long queue so we just kept on walking. However, I would expect these displays and interactive areas like the temple build and 3D wall to entertain some children during their queue. 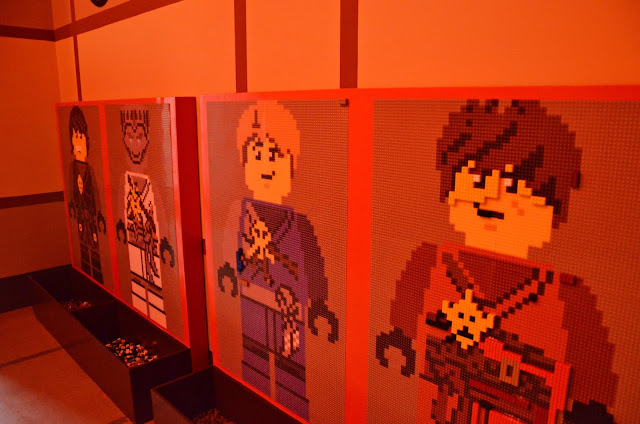 We arrived at the briefing area where guests get to pick up our 3D glasses (at the left cubby holes) and watch some introductory videos. 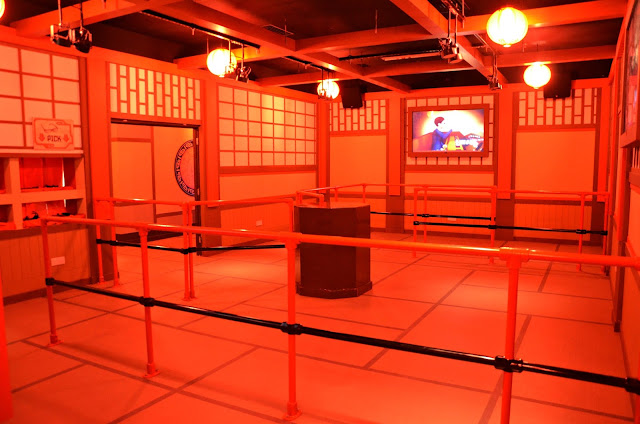 Excited to go! There was a technical issue at towards the end of the media launch so we were even more excited to finally hop on the ride after it was fixed. 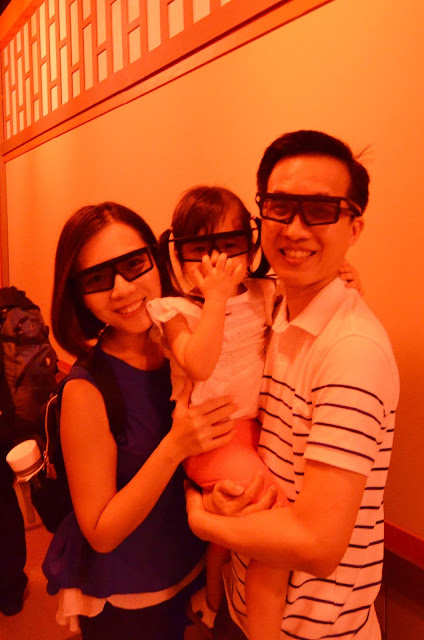 There are 8 trains in total, where each train has 2 cars and each car fits up to 4 riders.

Loose items such as phones, cameras and umbrellas must be kept in bags during the ride. We surely won't want any items to be thrown off the cart! 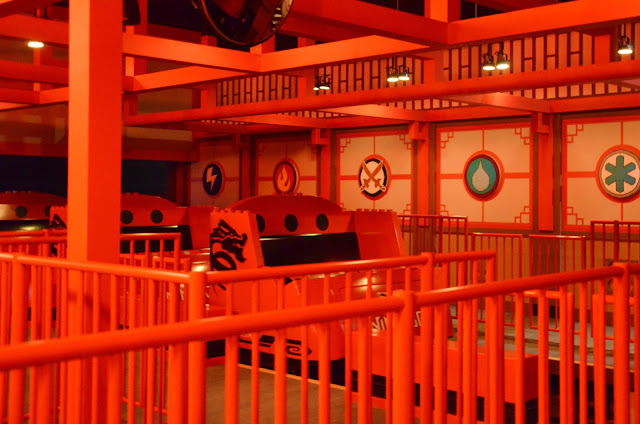 Each ride takes 3 mins 30 seconds - short but definitely good enough as my arms are tired by the end of the ride. 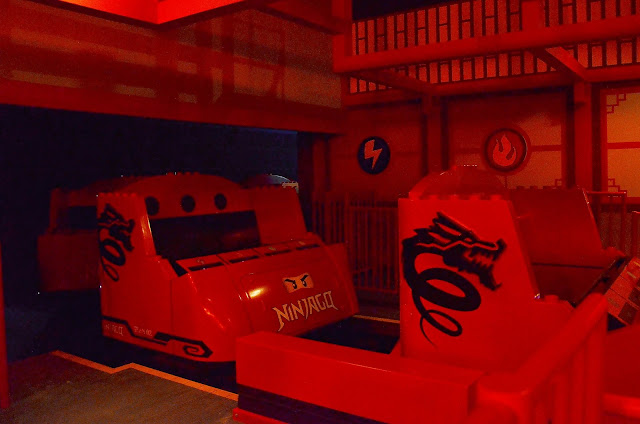 As we moved closer to the track, Emma became more afraid. But, we thought it's probably an exciting and adventurous experience for her so we mustered her courage and got her into the cart with us. 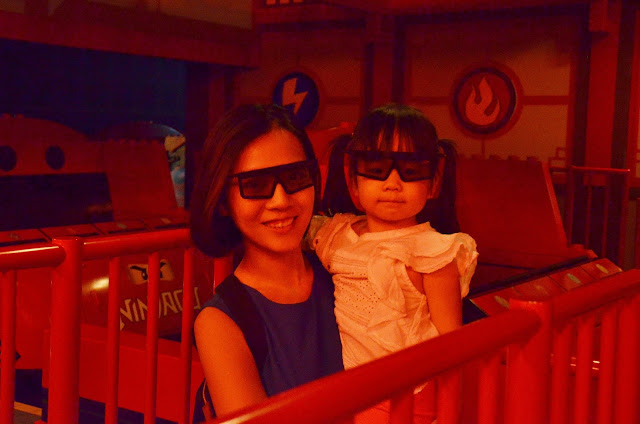 The cart moved along a flat track and switched from scene to scene with multiple twists and rotation. There were a total of 13 scenes with heat, smoke and wind being incorporated through the adventure, giving us an ultimate interactive battle experience.

It felt like a real intense battlefield with the 4D effects and all we did was to keep our hands moving and try to "shoot" the enemies with our virtual lightning bolts, shockwaves, ice soaring and fireball.

Emma was enjoying herself for the first part, moved her hands just like how we did and scored 2000 points. Then, the whole thing felt so real to her that she spent the rest of her time hugging and sobbing by my arms. Even so, she refused to cover up her eyes as she did want to miss out the good show. Of course, it's frightening for one who only play with dolls and plush toys. But rest assured, she was safe, unhurt and guarded by the lap bar.

For the first time, I beat Hubby single-handedly with 96,700 points while I wrapped Emma with my right arm! Check out the short video below for a glimpse of the ride.

It was an exciting, eye-opening and family friendly adventure! Totally worth a ride! We been to several theme parks and such interaction on a ride is surely our first! Hubby and I totally enjoyed it! Not for Emma, I would love to go for a couple more rounds.

While it might be a super thrilling experience for Emma and maybe for some young children, we were glad that she tried it. Oh well, we all need some form of courage training, right? Furthermore, she learnt how to "shoot, shoot, shoot" with her hands and kept attacking me after the ride. We actually went on to train her courage further by asking her to approach halloween characters for the "Brick and Treat" game. 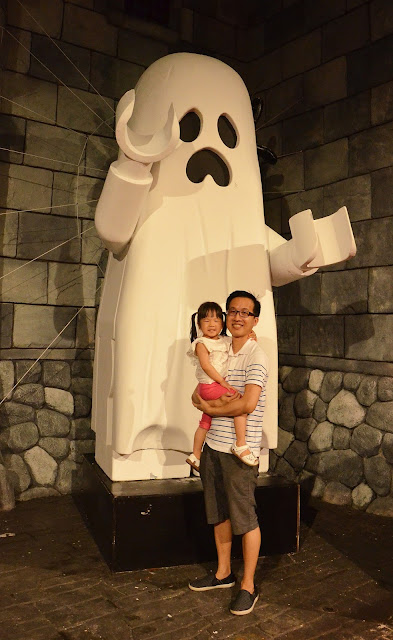 Legoland Malaysia is having 20% off promotion for the different types of tickets. The pricing work out to be very affordable and much cheaper than lots of other theme parks! Besides, it's actually very near Singapore - it took us an hr on coach and I believe it would be faster if you are driving. Click here to find out more.

Do give this new awesome attraction a try the next time you hit Legoland Malaysia! I'm sure you'll enjoy it too!

Disclaimer: We were invited to the LEGO® NINJAGO™ THE RIDE media launch and Legoland Malaysia Resort for a night stay.
Posted by Ashlyn Thia